Thomas Tuchel claims that Roman Abramovich’s decision to relinquish control of Chelsea has no bearing on him or his club.

In a statement, Chelsea boss Thomas Tuchel said: “We are calm in the centre of a storm or of some noise around us that we cannot control and we are also not responsible for it. It’s best to stay calm, focus on what we love and what we do. This is a sport.”

Thomas Tuchel has implored the media to stop asking him questions regarding Roman Abramovich, claiming that he has “no answers.”

Thomas Tuchel, visibly touched, requested reporters to stop questioning him about the crisis in Ukraine, calling the situation “horrible.”

“You have to stop, I am not a politician,” Thomas Tuchel remarked, finally stopping journalists after several questions at his pre-match press conference before Chelsea play Luton in the FA Cup.

“I can only repeat myself, and I feel bad to repeat it as I never experienced war. So even to talk about it, I feel bad.

“I’m very privileged as I sit here in peace. I do the best I can but you have to stop asking me these questions as I have no answers for you.”

Chris Bryant, a Labour MP, used Parliamentary Privilege to expose that Chelsea owner Roman Abramovich is selling his London property and another flat, notifying the House of Commons.

Thomas Tuchel claims that Abramovich’s decision to hand over ownership of the club to trustees has had no impact on him, the team, or the club’s day-to-day operations.

Despite Abramovich’s announcement that the club’s stewardship and care will be handed over to its charitable foundation, he said he does not expect his obligations at Stamford Bridge to change. On the eve of Chelsea’s Carabao Cup final defeat to Liverpool, Abramovich issued a statement.

Ahead of Chelsea’s FA Cup fifth-round clash against Luton Town, Thomas Tuchel said: “For me as a coach and in charge of the first team, the position doesn’t change too much in the daily business.

“I have daily exchanges with [director] Marina [Granovskaia] and [technical and performance advisor] Petr Cech about how to improve the first team and this won’t stop because they stay in charge. It doesn’t affect what I do on a daily basis.”

When questioned if Roman Abramovich’s ownership of Chelsea is a concern, he responded “It’s a bit too much for me to answer. I’m not aware of any details and I’m not aware of the whole situation. We all agree there are situations much more important than football.

“This will never change. Situations like war are of course so much more important but it’s not for me to comment on the situation with Abramovich. I don’t know enough about it.”

Thomas Tuchel: We try to be calm here

“There are much more important things than football. Of course, war is horrible and there cannot be any other opinion than this. But why should we be more distracted than anyone else? There is a huge distraction going on and we are worried but we try to create an atmosphere where we can focus on our passion.

“We are privileged but of course across Europe, everyone has noise in their heads they don’t like. Everyone is trying to do their best to do their work.”

When questioned if he was worried about the future running of Chelsea, Thomas Tuchel said: “I’m not sure if I’m the person to give any messages to the fans that aren’t sporting.

“We try to be calm here and we are calm in the centre of a storm or of some noise around us that we cannot control and we are also not responsible for it. It’s best to stay calm, focus on what we love and what we do.

MUST READ:  Pregnant side chic exchanges words with legal wife as she forces herself into lover's matrimonial home(Video)

“There is a lot of commitment from the players and the fans but everyone is aware there are more important things.

The situation in Ukraine is much more important than football and yet still there was a full stadium at Wembley and two strong teams who played a fantastic match. We can distract the fans and entertain them, and I don’t see any other solution.”

Chelsea plays Luton Town tomorrow in the FA Cup, influential winger Hakim Ziyech has been ruled out of the tie, he also missed the Carabao Cup final on Sunday in Wembley. 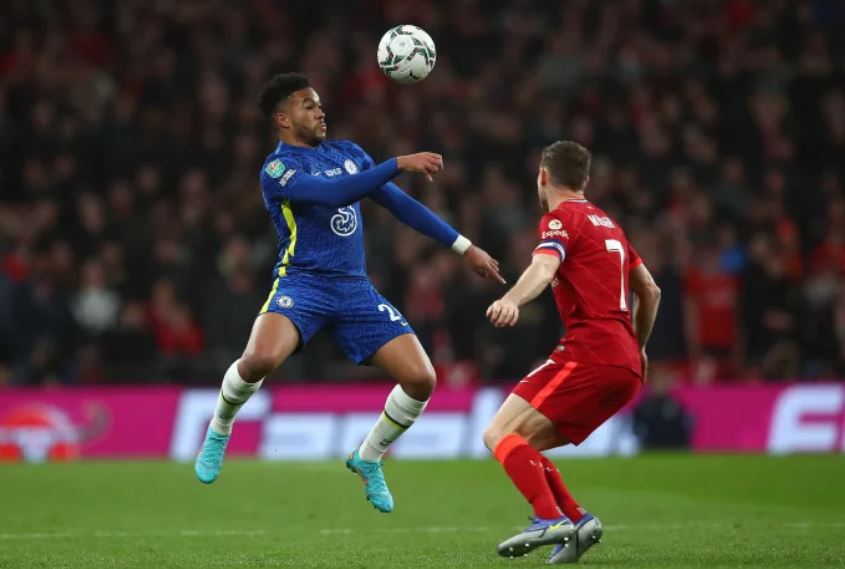 Reece James made his comeback for Chelsea at Wembley

Reece James made his comeback from a two-month injury spell for Chelsea against Liverpool in the Carabao Cup final at Wembley. Will he be fit enough to play two games within four days?