I'd rather die than fail my supporters - Peter Obi

I’d rather die than fail my supporters – Peter Obi 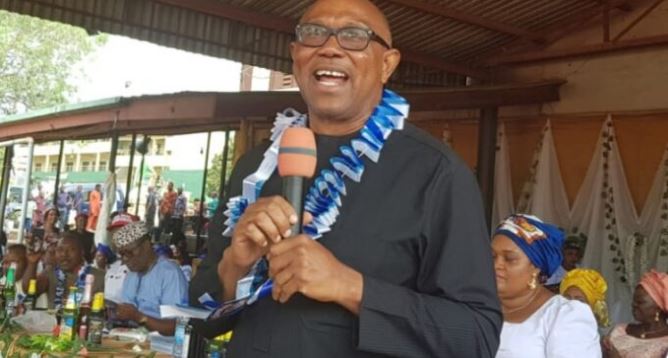 The Labour party (LP) presidential candidate for the upcoming 2023 elections, Peter Obi says he would rather die than fail his supporters.

He made this known on Monday at the Editors Forum, an initiative of the Nigerian Guild of Editors (NGE), Obi said he is determined not to fail members of the Obidient movement.

The LP presidential candidate said that with the right leadership, the nation could overcome its problems and transition from a nation of consumers to a producing nation.

“I am determined not to fail them. I would rather die than fail them. I am going to serve them,” NAN quoted him as saying.

“We are going to involve women and youths if I have the opportunity to serve because that 50 percent of our population must come into productive use.

“We cannot have that number of people living in poverty and not have criminality, banditry, and so on.

“We must remove sharing formula and replace it with the production formula. The hope of this country is the vast uncultivated land, not that oil we are seeing.

“My commitment is to put Nigeria into production. It is not acceptable that we cannot feed ourselves. We must get the country to work. All it requires is the leadership that understands and can drive the process. I can do that.”

On campaign funding, Obi said contrary to insinuations, no one else is funding his campaign.

“I cannot be talking about being transparent about managing public money without starting with my campaign,” he said.

“I do not pay people to work with me. Nobody will say he is funding Peter Obi’s campaign. I am funding it myself.

MUST READ:  Just In:Tanko Muhammad Is Set To Resign As Chief Justice Of Nigeria