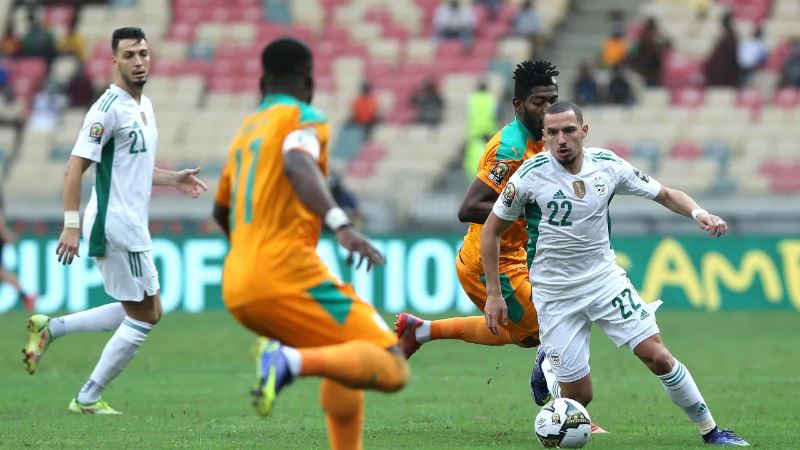 Ivory Coast qualified for the last 16 of the Africa Cup of Nations (AFCON) with a decisive 3-1 win against holders Algeria, denying a firmly second-best opponent any opportunity of stealing Egypt’s legacy as the last team to win consecutive titles.

Ivory Coast 3-1 Algeria: In Douala, high pre-match stakes gave way to a cautious start, with both teams trying to be careful in possession, resulting in a paucity of clear-cut chances in the early stages.

Ismael Bennacer’s attempt from a fast corner was pawed away by Ivory Coast after 21 minutes, but it was his Milan midfield partner Franck Kessié who drew first blood moments later. On the break, he raced into the box and steered the ball home after some deft touch from Nicolas Pépé to score it 1-0.

Taking the lead was a good decision. Thanks to a compact mid-block that set them up to break away at any point, the ‘Elephants,’ who looked superbly well-drilled, forced Algeria to resort to long balls.

With his off-the-ball mobility, Kessié, in particular, caused a slew of issues, and the free-kick he won in the 39th minute saw the Ivory Coast double their lead. Algeria, who were rightfully down 2-0 at halftime, edged closer to taking an early jet out of the tournament as an unmarked Ibrahim Sangaré headed home.

Patrice Beaumelle’s side didn’t let up after the half, and Pépé, an Ivorian predator, added a third on 54 minutes after capitalizing on an error and slaloming through before wrapping the ball into the far corner with his left boot.

Algeria was awarded an admittedly soft penalty moments later after Youcef Belali fell down after colliding with Simon Deli. Riyad Mahrez, largely regarded as the lone Algerian with the ability to stage a comeback, failed to convert, and it felt like a perfect summation of Algeria’s tournament-long goal-scoring difficulties.

Algeria did break their mini-drought after 74 minutes when Sofiane Bendebka scored their first goal of the tournament, and Assa Mandi’s header forced a brilliant save from Badra Ali Sangaré shortly after.

But there could only be one victor, and not even a last-ditch Sebastien Haller headed goal being ruled out for offside at FT could dampen the Ivorians’ joy, as they will go into the knockout phase as one of the clear favourites to claim the Cup.

“It’s an almost perfect match, a lot of satisfaction, heart and courage. Unlike other matches, we managed to put in the necessary ingredients with success in the end. Tonight, a lot of positive things and if we continue like this, we can have something at the end. On this meeting, unlike Algeria who lacked confidence, we entered the game, with less negative pressure being assured of qualification.”

“It is simply a failure, difficult to make a rational analysis on the spot. We were keen to catch up on this match after a difficult start but the big problem, we did not manage to materialize our chances and even the penalties did not enter, doubt set in, we never managed to enter this competition”.