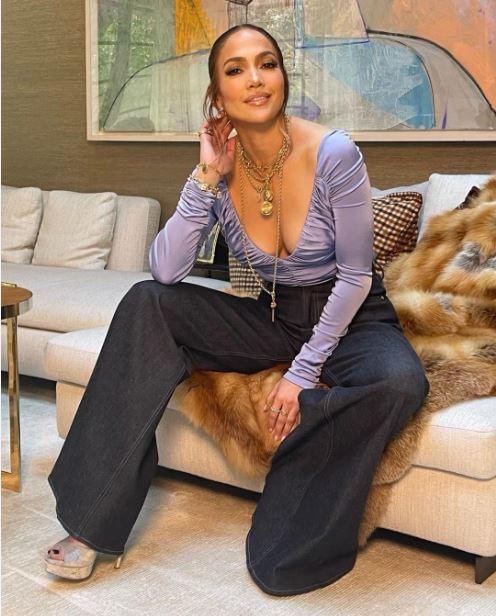 Jennifer Lopez shares adorable pictures on her verified Instagram page, she looked so gorgeous and happy.JLO as fondly called is 53 years of age but that does not reflect on her unblemished body.

Jennifer Lopez is an American singer, dancer, actor, Mother and shrewd business lady.JLO  journey into the music industry with her debut studio album On the 6 (1999), which helped propel the Latin pop movement in American music, and later starred in the psychological horror The Cell (2000).

With the simultaneous release of her second studio album J.Lo and her romantic comedy The Wedding Planner in 2001, Lopez became the first woman to have a number-one album and film in the same week.

Her 2002 release, J to tha L–O! The Remixes became the first remix album in history to debut atop the US Billboard 200. Later that year, she released her third studio album This Is Me… Then and starred in the film Maid in Manhattan.

Jennifer Lopez is seen as pop culture is considered a pop culture icon legend, and is often described as a triple threat entertainer.

With a cumulative film gross of US$3.1 billion and estimated global sales of 70 million records, Lopez is regarded as the most influential Latin entertainer in North America.

Jennifer Lopez sure does know her to lit the Instagram with gorgeous photos, workout videos from the gym. She has over a hundred and ninety million followers on Instagram and these huge fans are always well entertained by the Pop culture queen.

She performed at the inauguration of Joe Biden as the 46th President of the United States, which took place on Wednesday, January 20, 2021.

Marriage and relationships have not been too kind for Jennifer Lopez, she has married three times and divorced on three occasions. First got married in1997 to Oja Noa and divorced in 1998.

MUST READ:  Davido Takes Interest In A Viral Tweet Of A Boy That Scored A1 Parallel In WAEC Exams But Could Not Further His Studies

Just a day ago Lopez shared her workout video and she looked amazing the video has over eight million views on Instagram.