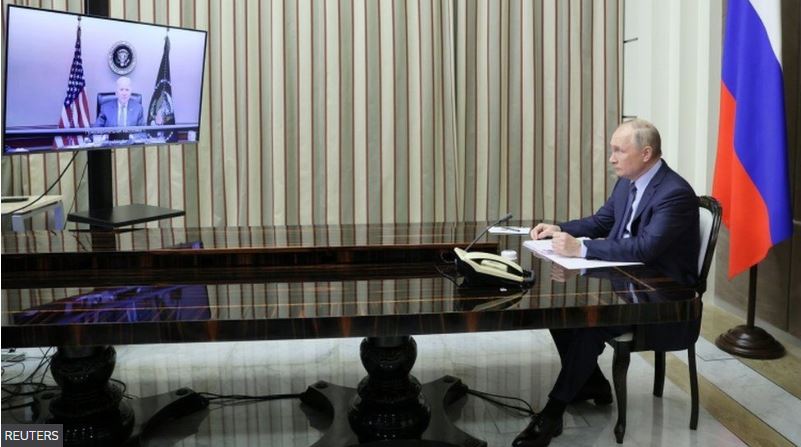 Joe Biden and Vladimir Putin hold talks over hostility between Russia-Ukraine, the conservation between both leaders lasted for two hours.

Moscow had previously stated that discussions were required because tensions were “over the charts.”

Thousands of Russian troops have been sent to the Ukrainian border, although Russia claims it has no intention of attacking the country.

It seeks assurances. Although Ukraine will not join NATO, Western powers insist Kyiv’s sovereignty must be respected.

According to Russian news agency Tass, they were kept on a secure video link established up under previous administrations but never used previously.

The first moments of the meeting were captured on video, as the US and Russian leaders exchanged friendly greetings. The discussions then went on behind closed doors for almost two hours.

According to Tass, Mr Putin held the talks from his home in the southern resort of Sochi.

“President Biden voiced the deep concerns of the United States and our European allies about Russia’s escalation of forces surrounding Ukraine, and made clear that the US and our allies would respond with strong economic and other measures in the event of military escalation,” the White House said in a statement following the talks.

“President Joe Biden reaffirmed his support for Ukraine’s sovereignty and territorial integrity and called for de-escalation and a return to negotiations,” according to the statement. 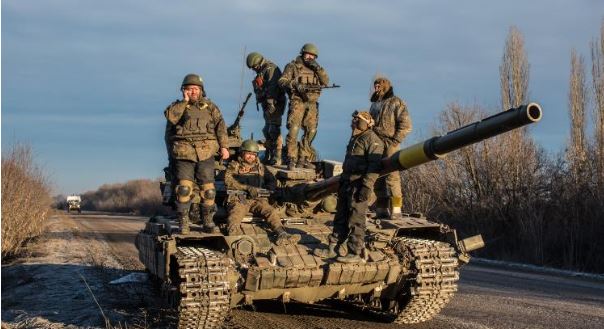 The two presidents also discussed “the US-Russia discussion on strategic stability, a separate dialogue on ransomware, and coordinated action on regional concerns such as Iran,” according to the White House.

Moscow has remained silent about the talks so far, releasing only a terse statement (in Russian) stating that the conversation took place on Tuesday.

Mr Joe Biden and Mr Vladimir Putin last met in person in June in Switzerland but made little headway beyond agreeing to send their ambassadors back and start a nuclear arms control debate.

The White House stated in a conference call on Monday night that the presidents of the United States, the United Kingdom, France, Germany, and Italy had devised a common strategy “to impose considerable and severe harm on the Russian economy” if Russia invaded.

After his talks with Mr Vladimir Putin, Mr Joe Biden is set to meet with the four European leaders again.

In recent days, US officials have debated whether to impose broad sanctions on Russia in order to prevent Putin from launching an invasion of Ukraine. New sanctions against members of Putin’s inner circle and Russian energy producers are among them, as is one possible “nuclear option”:

Cutting Russia off from the SWIFT international payment system, which is used by banks all over the world.
Officials stated that final decisions on whether and when to implement the new sanctions have yet to be made, and that the Biden administration is now in talks with European partners, many of whom have closer economic ties to Russia, in the hopes of coordinating action.

In addition to considering economic measures, the administration is looking at the possibility of evacuating US people from Ukraine if Russia invades the country and creates a dangerous security situation. According to the sources, the Pentagon is leading the contingency planning, which comes as the administration updates Congress on how the US is preparing.

In a “dark” briefing to senators on Monday night, senior State Department official Victoria Nuland outlined the administration’s tough sanctions package in response to a potential Russian attack but acknowledged that the US’ options to deter an invasion are limited, according to a source familiar with the briefing.

In a tweet on Tuesday, European Commission President Ursula von der Leyen stated that the EU “continues to completely support Ukraine in the face of Russian aggression.”

“Any additional aggressions will be met with a scale-up and expansion of existing sanctions,” she warned.
She also stated that the EU is “willing to implement additional restrictive measures in collaboration with our partners.”

“The emergence of extremism and despotism can likewise pose a threat to countries’ security. We must also discuss Russian military movements and their tremendous build-up near Ukraine’s eastern border in this context “she went on.

AFTER THE TALKS BETWEEN BOTH LEADERS…

The allies were briefed on Biden’s call with Putin, and the “leaders reaffirmed their support for Ukraine’s sovereignty and territorial integrity, as well as the need for Russia to decrease tensions and engage in dialogue,” according to a White House statement.

Sullivan stated during the White House press briefing on Tuesday that the White House staff was debriefing NATO, European Union, and key Indo-Pacific allies on the US-Russia call. On Thursday, Biden will meet with Ukrainian President Volodymyr Zelensky.

Sullivan noted that Biden will meet with the leaders of both chambers of Congress to discuss “ways in which the administration and Congress can work together on a bipartisan basis to stand up for American interests and values and stand behind our friends and partners.”

According to the Russian readout of the Biden-Putin meeting, Ukraine was the “predominant” topic of discussion, and Biden “emphasized the allegedly threatening nature of Russian troop movements near Ukrainian borders and outlined sanctions measures that the US and its allies would be prepared to apply in the event of further escalation of the situation.”

“In response, Vladimir Putin emphasized that blame should not be put onto Russia’s shoulders,” according to a Kremlin statement. “NATO is making reckless attempts to capture Ukrainian territory and is building up its military capability at our borders.” “As a result, Russia is very interested in getting trustworthy, legally binding guarantees that exclude NATO’s eastern expansion and the deployment of offensive strike weapons systems in Russia’s neighbouring states.”