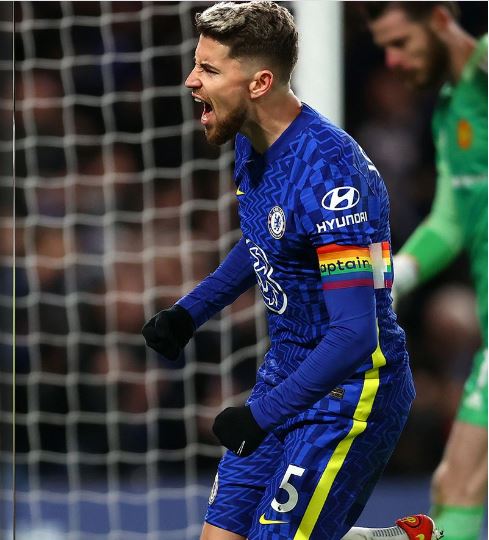 Chelsea 1-1 Manchester United : Jorginho was a focal point in the result at Stamford Bridge,the Chelsea Midfielder error gave Jadon Sancho the chance to score his first Premier League goal before making amend to equalise with a calm penalty kick.

Jorginho at the centre of stalemate at the Stamford Brigde,the Italian poor control of the ball in the middle of pitch gave Manchester United Jadon Sancho an early Christmas gift to score his first Premier League goal.

Throughout the opening 45 minutes of the Premier League match, Chelsea dictated the tempo against a Manchester United squad that was off of form and without a substantive  manager.

Despite the hosts’ dominance in possession, the only notable moments were an Antonio Rüdiger shot that hit the crossbar and a David De Gea save from Callum Hudson-Odoi. Manchester United will have walked down the tunnel for half-time feeling fortunate to still be playing in their first Premier league match after Ole Gunnar Solskjaer’s departure, having failed to cause their opponents even the tiniest of concerns before the break.

Notwithstanding opening the second half with similar levels of control, the home side’s fortunes were turned barely five minutes in when Jorginho  mis-judged a high ball on the halfway line that allowed Jadon Sancho and Marcus Rashford to break free.

Jadon Sancho slid the ball past Chelsea goalkeeper Edouard Mendy with all the time in the world, giving the ‘Red Devils’ an unexpected lead early in the second half.

Thiago Silva was clipped in the box by Aaron Wan-Bissaka as the full-back sought to clear the ball in the 67th minute, causing referee Anthony Taylor to give a penalty. Jorginho calmly stroked in the resulting spot-kick, making amends for his earlier error and bringing the game back to a 2-2 draw.

In spite of putting on the pressure, Chelsea unable to break past a resolute United defencee in the second half, resulting in a point for the title hopefuls. In the middle of their several times of pressure, Thomas Tuchel’s team will be frustrated not to score a winning goal. The hard-fought draw, however, may not come as a surprise given that the ‘Blues’ have lost their last eight Premier League meetings against Manchester United.

MUST READ:  Jurgen Klopp unfazed ahead of merseyside derby

Chelsea manager Thomas Tuchel said: “I’m absolutely happy. I was happy to coach the team, I saw a huge effort, big intensity, so many ball recoveries in the opponents’ half, put the pressure up high. We controlled the counter-attacks before they started, we were brave and courageous.

“They defended deep and maybe you need the first goal to open up a bit and gain the last per cent of freedom and confidence to have follow-ups and big chances on goal. If you don’t score, you always run a bit behind because you feel like you’re the stronger team, you play in the opponents’ half so we have two or three big chances we should have maybe used. But, in general, I am very happy with the way we played. I was pleased with our aggression, our rhythm and the intensity.”

Man Utd caretaker manager said: “I’m disappointed actually. When you are in front in a game like this to have it taken away is disappointing. I’m proud of the players and the group all week. In a difficult situation we tried to make the best of it. But there is that little bitter feeling. We came to win the game. A little disappointed, I can’t lie.

“I don’t think it was a penalty at all. They have had a lot of shots David had two saves which we knew before the game he would have to make one or two. Other than that I have felt quite comfortable in the game. Of course we want to be better. I am not getting carried away but I thought we defended well. I cannot fault the boys one bit. To come away disappointed and to feel like you have left something out there is a positive.”

Chelsea plays Watford in the Premier League at 7.30 p.m. on Wednesday, while Manchester United plays Arsenal at 8.15 p.m. on Thursday.