Liverpool 2-0 Leicester City: Portuguese international Diogo Jota got a brace as Reds tries to close the gap on Manchester City at the top of the Premier League table.

In-depth match report and reactions as Liverpool reduce the gap to Manchester City to nine points with a 2-0 win over Leicester; Diogo Jota got a brace for Jurgen Klopp’s side; Mohamed Salah appeared as a substitute after returning from Africa Cup of Nations.

Jota brace secured a comfortable 2-0 win over Leicester City at Anfield and this keeps Reds hope alive to push for the Premier League title despite Manchester City commanding at the summit.

Jota brace was enough at Anfield to give Liverpool three points, the Portuguese international scored both goals in either half of the game. He enjoys playing against Foxes, this is his seventh career goal in 11 appearances against them across all competitions.

Jota scored from close range after Kasper Schmeichel had parried Virgil van Dijk’s header in the 34th minute, then scored from a Joel Matip pass in the 87th minute, bringing Liverpool back within nine points of Manchester City with a game in hand.

The Reds were without Sadio Mane, who returned late from the Africa Cup of Nations, and Jurgen Klopp resisted the temptation to start Mohamed Salah, who was selected on the bench after Egypt’s defeat to Senegal in the final on Sunday.

Salah did come off the bench in the second half, receiving a standing ovation from the Anfield crowd before looping a shot against the woodwork and watching Schmeichel deny him twice more. Jota’s second goal came after Liverpool had squandered a series of chances, securing Liverpool’s sixth consecutive Premier League home win and leaving Leicester in 12th place, still reeling from their FA Cup 4-1 loss to Nottingham Forest on Sunday.

After exchanging passes with Ademola Lookman, Brendan Rodgers’ side defended resolutely for the first half-hour and had brilliant moments in attack, most notably when James Maddison’s angled shot was superbly stopped by Alisson. Van Dijk headed Trent Alexander-corner Arnold’s goalwards, with Jota thumping home the rebound following Schmeichel’s initial save.

From then on, Liverpool took control of the game, with Diaz’s speed and directness causing difficulties on Leicester’s right flank, and the pressure on the visitors grew once Salah replaced Roberto Firmino on the hour mark.

After losing in a penalty shootout to Senegal in the Africa Cup of Nations on Sunday, the Egyptian returned to Anfield and played like a man with a point to prove.

After turning away from two Leicester players in the box, Schmeichel bravely denied him, and the Dane then made an even better save when he raced through on goal after latching onto an errant pass by Kiernan Dewsbury-Hall.

But Jota’s clinical second, when he struck on the turn from Matip’s cross, his strike too powerful for Schmeichel eventually shattered the visitors’ resistance and gave Liverpool the two-goal lead they deserved after their dominant performance.

MUST READ:  Brighton Midfielder, Mwepu forced to retire at 24

17 – Diogo Jota has now scored 17 goals across all competitions for Liverpool this season; already his most in a single campaign while playing for a Premier League club. Explosion. pic.twitter.com/ZGLCkbJOcR

REACTIONS FROM KLOPP AND RODGERS

After the game Liverpool boss, Jurgen Klopp praised Diogo Jota for his excellent goal-scoring run.”With the first goal, when you are in a goalscoring moment, then you are there.

“That’s exactly what’s happening for Diogo at the moment. I’m really happy for him and it’s really helpful for us.

Klopp was asked if he expected the Portuguese to become a good goalscorer, Klopp answered: “We had a sense that it could happen. Diogo was not a bargain, it was not as if we got him for free.

“But the first thing that was obvious about him was his potential that was there, the work-rate that he puts in – that was the most important thing.

“If you have that, then there is always space for improvement. He’s still a really young lad so you have to take the next steps in the team with us where we create much more chances than, with all due respect, Wolves did.

“You need a bit of fantasy for that and imagination, but we really thought he would be an outstanding player. He was already when he came here but he has improved.”

Brendan Rodgers team suffered a humiliating 4-1 loss to Nottingham Forest in the FA Cup, so restoring pride in the way of performance was crucial facing Liverpool.

“One-hundred per cent,” Rodgers said. “I think tonight was not just about the result, it was about restoring pride.

“We saw the supporters at the end applauding the players off. They gave absolutely everything in the game.

“They showed some real moments of quality and we took a top team right until the end.

“It was much more like us. Tactically, we were good in the game and organised. We got into some good areas.

“My only disappointment was that we lacked that little bit of care and precision in the final third, otherwise we could have made more chances.” 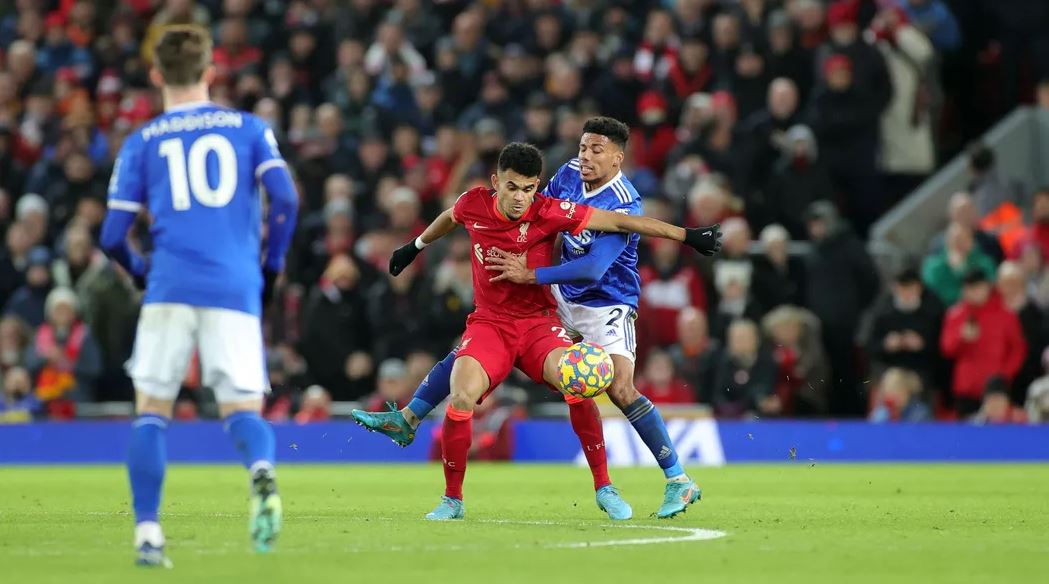 Liverpool visits Burnley at Turf Moor on Sunday at 2 pm while Leicester City host West Ham at 4.30 pm on Sunday.