Nottingham Forest 0-1 Liverpool: Diogo Jota scored in the 78th minute to settled a tight contest that booked Reds a  spot in the FA Cup semi-final against Man City.

An in-depth report from the Emirates FA Cup quarter-final clash between Nottingham Forest and Liverpool at the City Ground. 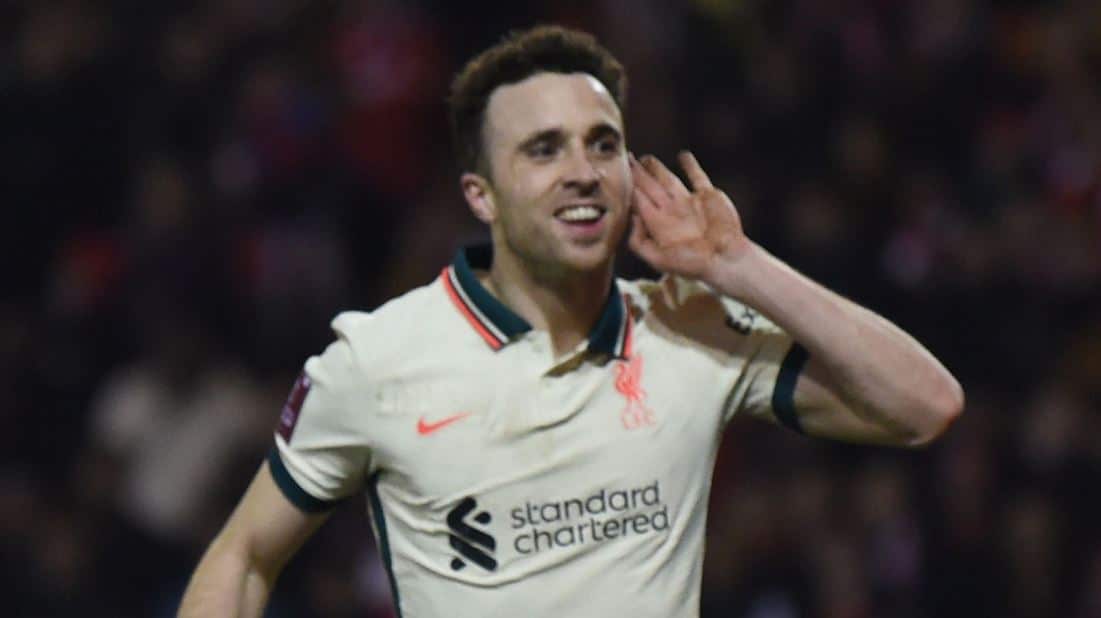 Diogo Jota scored late to break Nottingham Forest’s resilience as Liverpool won 1-0 at the City Ground to advance to the FA Cup semi-finals against Manchester City.

Nottingham Forest arguably had the better of the game until Jota’s 78th-minute winner and had just missed a golden opportunity to take the lead themselves when Philip Zinckernagel missed from eight yards. Forest held Premier League title contenders Liverpool at bay for 90 minutes in front of a sell-out crowd, with Roberto Firmino’s dinked effort, well saved by Ethan Horvath, their only real chance before their eventual winner.

That came after excellent work from Kostas Tsimikas set up Jota’s far-post finish, which kept Liverpool’s quadruple hopes alive and set up a tasty semi-final against title rivals Manchester City – the weekend after the pair face off in the Premier League.

MUST READ:  Man Utd 1-0 Villa:Red devils through to FA Cup 4th round after VAR drama

19 – Liverpool's Diogo Jota (19) is now the outright top Portuguese goalscorer for clubs within the big-five European leagues this season, moving one clear of Manchester United's Cristiano Ronaldo (18) in all competitions this term. Chums. pic.twitter.com/5Np6ooHTIV

Nottm Forest gave Liverpool a run for their money

Scores can be deceiving, and the 90 minutes in front of a packed City Ground provided far more entertainment for fans of either side than the score suggested. Nottingham Forest, who are flying high in the Championship under Steve Cooper, refused to give their illustrious visitors an inch and set their intentions early on when the man of the match Joe Worrall robbed Jota in the home box with an inch-perfect sliding challenge.

They could have done more with the 30% possession they had before halftime, but they went in relieved to be level after their one forgettable moment, with Jack Colback caught in possession and Firmino, clean through, denied by a superb Horvath save after attempting to chip the goalkeeper.

Liverpool was given no quarter by Forest after the break and had to rely on long-range efforts and half-chances to avoid extra-time, which they couldn’t afford with a busy April ahead. When he was set up by an inviting low Brennan Johnson cross, Zinckernagel fired back across goal and past the far post to deny Forest another special moment in their FA Cup run, he may have saved them the extra 30 minutes, but not in the way they had hoped.

He was replaced moments later, and Jota’s smart back-post finish from Tsimikas’ cross, confirmed by a VAR review, put Liverpool ahead almost immediately.

Another chance came when substitute Cafu chested down another cross, but he was off-balance for his second and could only balloon over the bar with the Forest crowd on their feet.

At first glance, Alisson’s challenge on Ryan Yates in the Liverpool box appeared to be a penalty, but an unmoved Craig Pawson was backed up by VAR that there had been minimal contact between the pair.

The ease on the Liverpool players’ faces as the final whistle blew was a true reflection of the test they had been put through by their Championship hosts, as they celebrated a job well done and moved one step closer to making an unlikely quadruple campaign a reality.

Speaking after the game on Red’s website, Diogo Jota was asked whether Liverpool deserved to win, his response: Yeah. Obviously, it was a tough game, they are a great team, they play with a lot of intensity. They gave us a proper fight [but] in the end I think we deserved to win tonight.

Due to the international break, both teams will have a fortnight off before returning to their promotion push on Saturday, April 2 against Blackpool, kick-off at 12.30 pm.

At the same time, Liverpool will look to leapfrog Manchester City in the Premier League table when they host Watford before travelling to Benfica for the first leg of the Champions League quarter-finals on April 5; kick-off is at 8 p.m.