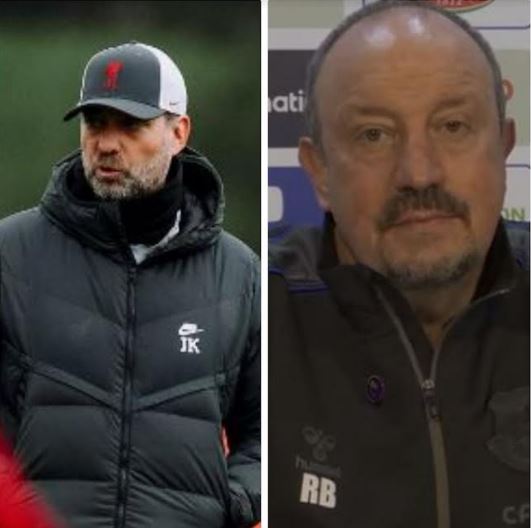 Jurgen Klopp takes Liverpool to Goodison Park for Merseyside derby,the Reds are in a free scoring run putting eight goals past the Gunners and Southampton in their last two Premier League games.

Jurgen Klopp unfazed ahead of Merseyside derby at Goodison park,his team are in form sitting in the third position on the Premier table just two points behind the Blues in first position.The Reds are heavy favourite to return all three points to Anfield according to football pundits.

Ahead of the Merseyside derby Jurgen Klopp spoke to the media: below are answers he provided to questions asked…

The difference between the Merseyside derby and other previous matches…

We all know there are some special things around derbies, these kind of things. But first and foremost, it’s a football game as well and that’s exactly how we want to approach it and that’s it pretty much. We know what our supporters want. I think we are not suspicious of not understanding the supporters’ soul and we try to fulfil their dreams and we try to fulfil their wishes, and derby games are more in the focus, if you want. But from our point of view, it’s a football game which we have to approach like a normal football game.

On Mo finishing seventh in the Ballon D’Or list…

Yeah about his position I was surprised, to be honest, but it’s not in my hands. I think I saw the votes somewhere – the Ballon d’Or is journalists’ vote? You don’t have to ask me then, it’s your fault. That’s how it is.

You are the journalists, if you think he should be higher up, then you have to convince your colleagues. I’m really not sure what it is 100 per cent. I said that you can give it to Lionel Messi for the career he has, for the footballer he is, all these kind of things. But if you don’t give it Robert Lewandowski this time then it’s quite tricky to get it at all. Yes, Mo definitely should have been higher up but that’s it.

On Van Dijk’s performance since his injury comeback…

He came back brilliantly. All the little things and people are really quick with that if something is not exactly like it was before, ‘Oh, he’s not the same anymore’ and stuff like this – that’s all, of course, not right. These kind of judgments make absolutely no sense because everybody needs time to get back. But he had a full pre-season, which is absolutely helpful.

MUST READ:  Man Utd 1-0 Villa:Red devils through to FA Cup 4th round after VAR drama

Since then we had to learn a little bit to deal with it. It was at least like this that in the third game in the week – even when he looked fine – he needed maybe this little break, which we gave him now last week. I’m not sure if we have to give him that still for the next few games but at least we need to have [it] in our mind to think about from time to time about that.

But apart from that, it’s all good, his comeback was absolutely brilliant since he’s back, is really good. If some things are not exactly like they have been, it’s only a matter of time when they will be exactly where they would have been because just his quality, there’s no doubt about that.

KEY STATS AHEAD OF THE MERSEYSIDE DERBY…