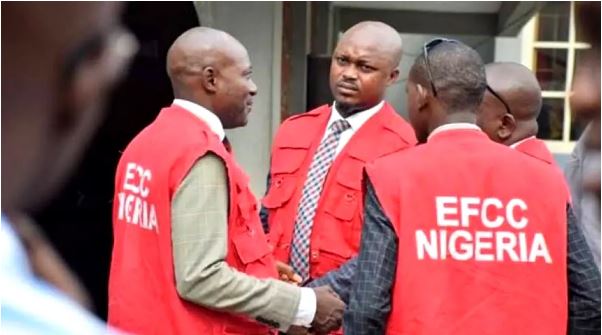 Economic and Financial Crimes Commission [EFCC] officials stormed some polling units in Ede on Saturday to observe the governorship election ongoing in Osun.

According to the News Agency of Nigeria (NAN), officials were seen moving around polling units and observing proceedings as voters took turns getting accredited and voting.

The anti-graft officials, dressed in red jackets, took strategic positions in Ward 2 unit 9, Ede North, apparently trying to see if there was vote-buying by greedy politicians.

A visit to Ward 4 Unit 1 revealed that the personnel in the polling unit had taken strategic positions.

Ward 5 unit 1 was no exception, as some of them were also stationed there, moving around and observing the proceedings.

MUST READ:  My Daughters have amazing brothers to love-Annie Idibia

According to NAN, the anti-graft agency is fighting vote buying and inducement in order to ensure that voters vote for their preferred candidates in the election.