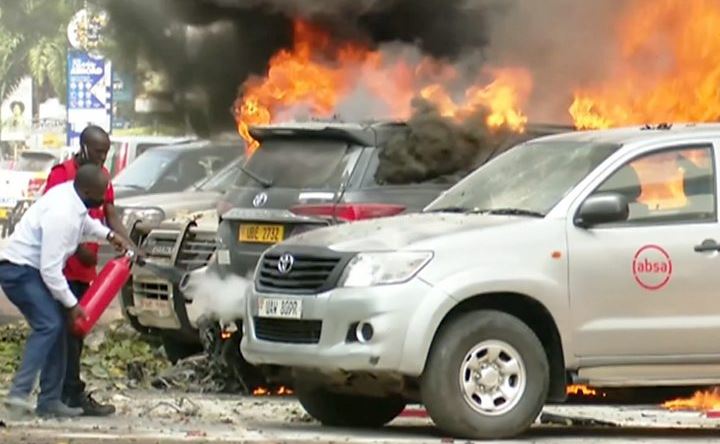 Suicide bombers struck Kampala, Uganda’s capital, killing at least three people and injured more than 30 others, according to the Police.

Three terrorists on motorcycles detonated explosives near the city’s police headquarters and parliament.

The death toll is certain to grow as a result of the explosives, which have left body parts strewn across the streets.

According to the insurgents’ Amaq News Agency, the Islamic State (IS) group claimed responsibility for the attack.

The two attacks happened three minutes apart. Officials said further devices have been discovered in different locations of the city.

“We suspect there are still more members of these domestic terror cells, particularly the ADF-created suicide bomb squad.”

According to authorities, the fourth terrorist has been apprehended and an explosive vest has been discovered.

Two police officers were among the three feared dead. Thirty-three people were hurt in the explosions, five of them critically injured.

Following the attacks, parliament was adjourned and MPs were urged not to visit the premises.

Cars parked near the legislature caught fire, while an explosion near the police station broke windows.

“A booming sound, similar to that of a large rifle, was heard. My ears were nearly deafened as the earth shook “Reuters news agency quoted Peter Olupot, a bank security who was close to the attack near parliament.

IS gave a statement on its Telegram channel, then reported by its Amaq News Agency, saying that its members carried out the attacks.

Officials had blamed the Allied Democratic Forces (ADF), a rebel group that pledged its allegiance to IS in 2019.

Originally formed in Uganda but now based in DR Congo, ADF increasingly carries out attacks in the name of IS.

In recent weeks, there has been a spate of bomb blasts. A 20-year-old waitress was slain in a bar in the city last month when a device was left in a shopping bag detonated.

A suicide bomber blew himself up in a bus near Kampala a few days later, injuring several people.

Both assaults were claimed by IS, and authorities indicated there were close ties with the ADF, with the bus bomber being on an ADF member’s wanted list.