In-depth match report as England forward Harry Kane produces a top-notch performance against Manchester City, providing the winning goal to cause pain to a team who pursued him throughout the summer transfer window and blow the Premier League title race wide open.

In a frenetic Saturday Night Football encounter at the Etihad Stadium, Harry Kane returned to haunt his long-term suitors Manchester City with a 95th-minute strike that clinched an unexpected 3-2 win triumph.

This was one of the best games of the season, and these two clubs always deliver when they meet, but this game reignited Tottenham’s Champions League chances and Liverpool’s Premier League title hopes. 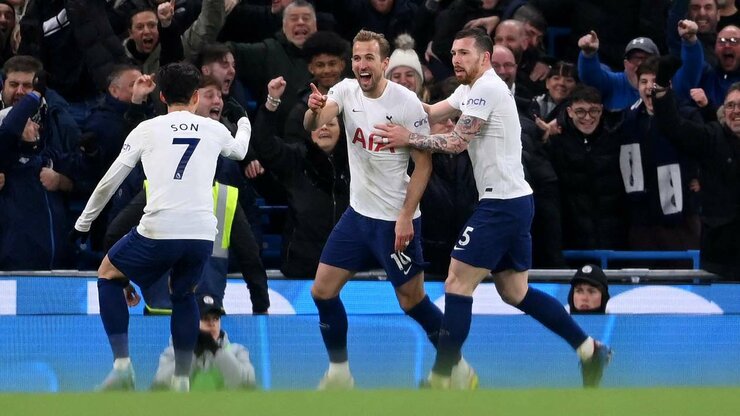 Kane was Man City’s main trouble from start to end, with his excellent dissection of City’s high defensive line setting up Dejan Kulusevski’s opening goal in the 4th minute. Ilkay Gundogan would rightly level the score in the 33rd minute but Kane would deliver once more after surviving intense pressure at the half.

Riyad Mahrez smashed his penalty high into the net (90+2), but Kane would have the ultimate word, outmuscling Kyle Walker to head Kulusevski’s cross into the net (90+5), sparking chaotic scenes in the away end. 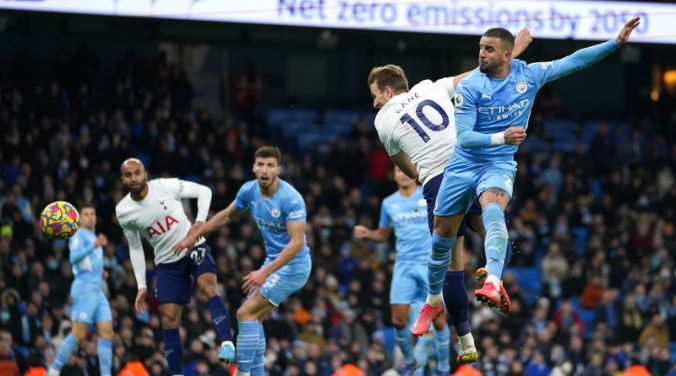 Pep Guardiola City’s remain six points clear of Liverpool at the summit, but having played one more game. Liverpool can close the gap to three points when they welcome Leeds on Wednesday.

“It was an emotional game for sure, it was an exciting game,” Antonio Conte disclosed after the game. “We played a good game. We followed a plan. Manchester City would keep the possession for 65 to 70 minutes for the game so we needed to be good tactically. But even when defending our first thought should be to attack.

“We created chances and scored good goals against a fantastic team. This win will give us more confidence. It wasn’t simple to play Manchester City after three losses in a row.”

Pep Guardiola react: “They are clinical. They have Kane and Son and Kulusevski. Their crosses we could not defend. We didn’t have the momentum. We didn’t need to lose a game already to know how hard it is [to win the league]. There are many, many games still to play.

“We defended the third goal badly at the back post. I said two weeks ago that we had to win a lot of points so we knew it. Teams are fighting for the Europa League, Champions League, against relegation so every game is going to be a battle.

“Since October, we hadn’t lost in the league so we know how hard that is. We knew they had a fantastic manager and after three defeats they would be there. In general, we controlled the game in the stats but we could not win.”

Pep was asked about Harry Kane he said: “It never was an option and everyone knows this so forget. It’s in the past. It’s not necessary for him to show today the goals he scored and his quality with the ball. Everyone knows it.”

Spurs boss Antonio Conte: “This is a process, we are working very hard to improve aspect. This type of game gives us confidence. First of all, I hate to lose. Our reaction was important.

“The Premier League is very difficult. In every game, you have to fight a lot. We are continuing to improve everything and at every level, we work very hard. Harry [Kane] is for sure an important player for us. Today our strikers played very well. Harry was very good at keeping the ball.

MUST READ:  Senegal 0-0 Malawi:Senegal claim top spot in group B

“I think the first goal was great because this goal is about our job and the work that we are doing every day. Only one win is not good enough. Don’t forget we are coming off three losses. But a win against Manchester City is very good.

“We have a lot of space for improvement. This is one of the hardest working teams I have managed in my career.”

Manchester City takes on Everton at Goodison Park in another Saturday Night Football match while Tottenham will play Burnley in the Premier League at 7.30 p.m on Wednesday.