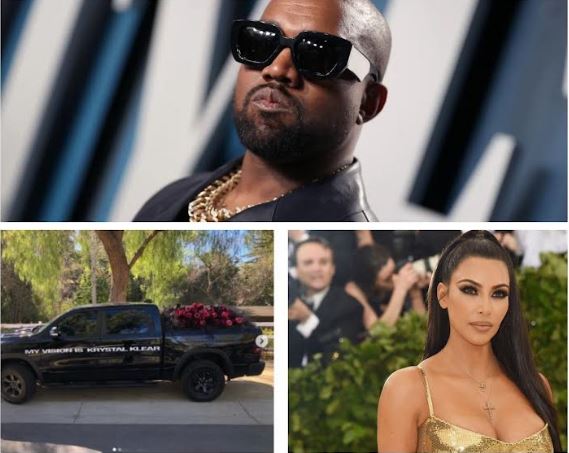 Despite the fact that Kim Kardashian filed for divorce from Kanye West a year ago next week, the rapper nonetheless gave her a romantic Valentine’s Day gift: a truck with the words “My vision is krystal klear” — note the k’s — painted on the side and roses in the rear.

MUST READ:  'No silly lavish cuppy party', Dj Cuppy says as she clocks 30

Kim Kardashian, who has four children with Kanye West — North, 8, Saint, 6, Chicago, 4, and 2-year-old Psalm — was spotted in New York City over the weekend. She dined at Lilia, an Italian restaurant in Brooklyn, with her boyfriend, Saturday Night Live star Pete Davidson.

West’s gesture came after a series of statements about Kardashian’s relationship, including one in which he said he believes he and Kardashian will reunite and another in which he called Davidson a “d***head.” West’s diatribe trended on Sunday, even before the Super Bowl.

MUST READ:  Father Take The Wheels Again-Actress,Queen Nwokoye Says As She Clocks 40(photos)

Kanye West advised married people to “HOLD YOUR SPOUSE CLOSE” and “MAKE SURE THEY KNOW HOW MUCH YOU LOVE AND APPRECIATE THEM” because someone is “LURKING” to “HELP DESTROY YOUR FAMILY.” He added that Kardashian should “ALWAYS REMEMBER WEST WAS YOUR BIGGEST W.”

Pete Davidson and Kim Kardashian first met in October, when the Keeping Up With the Kardashians star and lawyer hosted Saturday Night Live. They were celebrating Davidson’s birthday together with a little more than a month later. In December, Kardashian also petitioned the court to declare her legally single.

Despite this, Kanye West has made it clear that he wants Kardashian back.