In-depth match Report from the Carabao Cup final at Wembley Stadium between Chelsea and Liverpool as Kepa Arrizabalaga misses the crucial penalty kick as the Reds reign 11-10 in the shootout to claim victory.

After a long 11-10 shootout at Wembley, Liverpool won the Carabao Cup after Kepa Arrizabalaga missed the decisive penalty.

Liverpool win Carabao cup despite the introduction of Kepa Arrizabalaga, who was brought on for the penalty shootout by Chelsea head coach Thomas Tuchel in the penultimate minute of extra time, failed to save a single penalty before blazing his own penalty kick over the bar to give Liverpool victory after a goalless 120 minutes.

It was a spectacular moment that came three years after Kepa’s previous defining episode when he defied Maurizio Sarri’s orders to remove him ahead of Chelsea’s penalty shootout loss to Manchester City in 2019 final.

Liverpool won the Carabao Cup for the first time since 2012, moving them ahead of Manchester City to become the competition’s all-time most successful team with nine wins. It also marked the conclusion of Jurgen Klopp’s search for the club’s first domestic cup trophy.

Liverpool was in complete control of the ball, but Chelsea was creating obvious openings. They had three huge chances to take the lead, but Christian Pulisic was denied by Caoimhin Kelleher early on, then Mason Mount lacked the composure to score when given wonderful opportunities on either side of half-time.

These were the kinds of opportunities that an excellent striker should have seized, but Tuchel benched Romelu Lukaku once again. named the Belgium international on the bench.

At the half-hour mark, Liverpool had a fantastic chance of their own, but Eduoard Mendy’s incredible double save denied them.

He first got low to deny Naby Keita’s drive from the outside of the box, then reacted quickly to push Sadio Mane’s follow-up effort over the bar from point-blank range.

On 65 minutes, though, he almost cost his team the game with a sloppy clearing that allowed Mane to play in Mohamed Salah. Thiago Silva cleared his attempted dink away from the line, but even the Premier League’s most clinical finisher was found wanting. 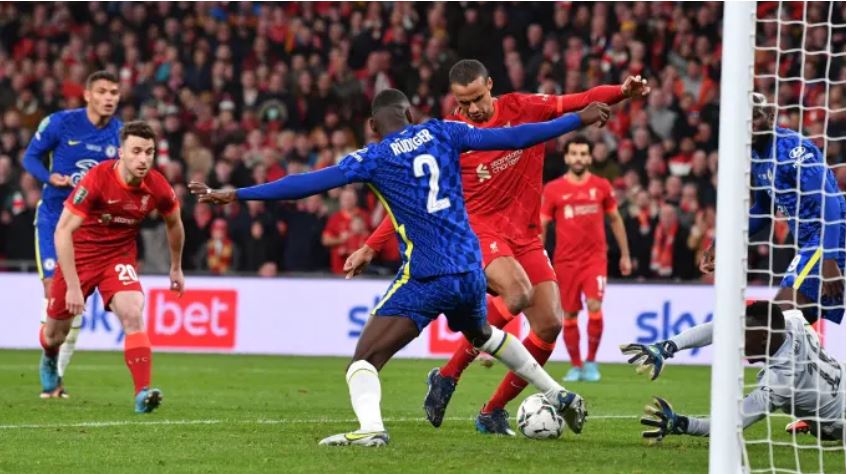 Moments later, Liverpool believed they had grabbed the lead when Mane crossed for Joel Matip to convert from a couple of yards out, but the goal was ruled out following a lengthy VAR review. The player responsible was Virgil van Dijk, who was accused of obstructing Reece James in the build-up from an offside position.

Lukaku was eventually inserted, and he thought he had given Chelsea the lead for a brief second early in extra time. However, VAR revealed that the striker was fractionally offside as he ran in behind onto a Trevoh Chalobah ball and finished past Kelleher.

Chelsea had the ball in the net again in the second half of extra-time when Kai Havertz turned and finished, but the Blues were once again denied by the flag, with the Germany international being narrowly offside.

When Kepa was introduced, the game went to penalties, but he failed to save a single penalty before shooting his own over the bar, handing Liverpool victory.

Romelu Lukaku was eventually brought in, and he thought he had given Chelsea the lead for a brief second early in extra time. However, VAR revealed that the striker was fractionally offside as he ran in behind onto a Trevoh Chalobah ball and finished past Kelleher. 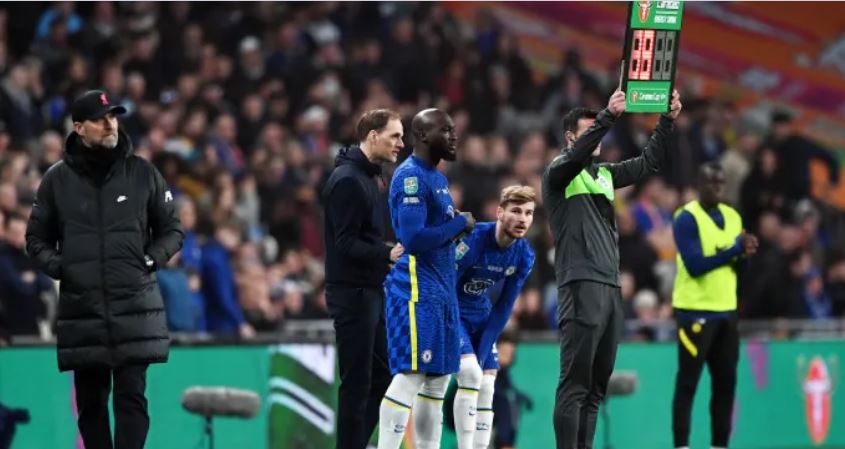 Romelu Lukaku coming into the game

Chelsea had the ball in the net again in the second half of extra-time when Kai Havertz turned and finished, but the Blues were once again denied by the flag, with the Germany international being narrowly offside.

When Kepa was introduced, the game went to penalties, but he failed to save a single penalty before shooting his own over the bar, handing Liverpool victory. 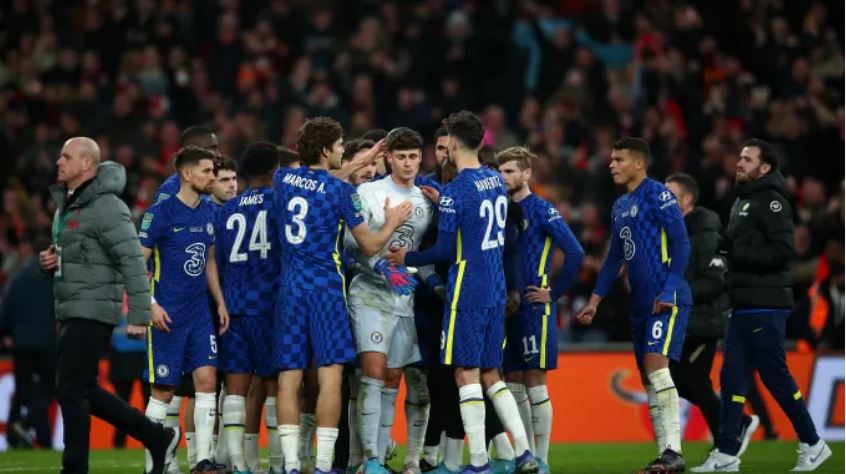 Chelsea manager Thomas Tuchel said: “We feel bad for him [Kepa], of course. It was a bit harsh that he was the guy to miss the one and only penalty but there is no blame.

He told the media: “We did it before, and Kepa is slightly better in penalty saving. That’s why that was the decision. It’s pretty unusual that all 11 players need to shoot, he took it a bit too quick, sometimes these things can turn around against you. We take the decisions when the decisions need to be made, and not after when everyone can judge. We have reasons to do it, and nobody, I just said in the dressing room, I hope no one loses a night of sleep because it’s not necessary and certainly not Kepa. It’s how a final is, one team has to lose – and we were part of a brilliant football match.”

Jurgen Klopp reacts: Kelleher is the best No 2 in the world

“The life of a No 2 goalkeeper is you have to be ready when called. I can remember at least two incredible saves, probably a few more. He proved that the decision to play him was absolutely right, and then in a spectacular shoot-out he showed the whole range of his skill-set. He was top class.”

He told the media: “Even in professional football, there should be space for some sentiment. So when it’s a young boy, we ask him to do a lot, he gets the competition, he plays and then I say for the final, no, you don’t play.

“I am two things – a professional football manager, and a human being. And a human being first. It’s so nice, he deserves it. At the training centre, we have a wall with the goalkeepers listed who won something – and I told him, if we won tonight, it meant putting him on as well. It’s exactly how it should be.”

Luton is next up for Chelsea on Wednesday in the FA Cup. Liverpool host Norwich in the FA Cup last 16 on Wednesday before returning to Premier League action on Saturday at home to West Ham who defeated them in a five-goal thriller back in November.