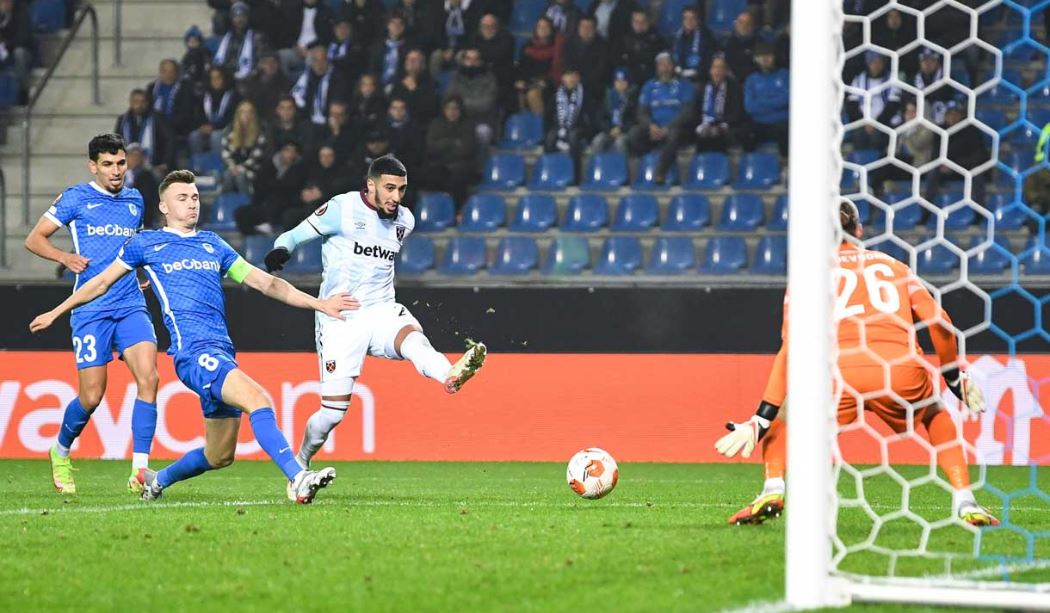 Following two fantastic Said Benrahma goals to give West Ham the lead on manager David Moyes’ 1000th game in charge, West Ham United had to settle for a draw thanks to a late Tomáš Souček own-goal. The Belgians have made it out of their group on four occasions in the last four years, but they are up against it this time.

The ‘Hammers’ entered the game on a mission to become the first team to go through a group stage without conceding a goal.

With a 2-2 draw in Genk on Thursday night, West Ham United retained their perfect record in the UEFA Europa League.

In David Moyes’ 1,000th game as a manager, he saw his team come back from the setback of falling down early in the game to Joseph Paintsil’s goal, to put in a much better second-half performance and go ahead thanks to Said Benrahma’s double.

The Hammers appeared to be on their way to claiming all three points, only for Tomás Soucek’s late own goal to square the score and give Genk the point they deserved after a spirited first-half performance.

Nonetheless, Moyes will be pleased to see his team, who struggled in the first half, still leading Group H after three victories and a draw, and bound for the knockout stages.

The Hammers had beaten Genk 3-0 in London a week ago, but the Belgians have since broken out of their local rut, scoring six goals in each of their previous two games.

By the time Paintsil gave them a fourth-minute lead, the supporters in Genk’s Cegeka Arena had barely had an opportunity to settle into their seats.

The home Wideman was able to latch onto a through ball in the right channel, elude Issa Diop’s attentions, and shoot low and hard across Alphonse Areola. The Hammers goalkeeper got a hand to it, but not enough to prevent it from going in at the far post.

West Ham was spooked by Genk’s quick start, and towering striker Paul Onuachu came close on two occasions with headed efforts, first drawing a wonderful reaction save from Areola and then tipping over the top when well placed.

Junya Ito, however, pulled his shot wide of an unguarded net after the lightning-quick Paintsil sprinted clear down the right flank and took Areola out of the equation with his cut back.

West Ham had been clearly second best up to this point, but came on strong in the last minutes of the first half, coming within inches of equalizing on two occasions.

First, Benrahma arrived late in the area to meet Arthur Masuaku’s close-range cross, but goalkeeper Maarten Vandevoordt made himself huge to block it.

Then Vandevoordt was back in the thick of things, getting a half-block on Michail Antonio’s ferocious shot, slowing it down enough for Bryan Heynen to slip in and clear off the line with Declan Rice waiting.

The Hammers were behind 1-0 at the interval but came out firing in the second period, tying the game a minute before the hour.

MUST READ:  AARON RAMSDALE HAS SIGNED A LONG TERM CONTRACT WITH THE GUNNERS

Benrahma began and finished the move, passing wide to Vladimir Coufal before moving into the area and finishing low when the Czech pulled back.

Coufal was close to scoring his first goal for West Ham when he got on the end of Vandevoordt’s parry from a Cresswell cross but volleyed just past the far post.

Benrahma’s individual brilliance eight minutes from time turned the game around and handed the visitors the lead.

The No. 22 passed the ball around his man and surged into the box, before smashing his shot past Vandevoordt and into the net.

In the second half, Genk had barely threatened, but in the 88th minute, the unfortunate Souek headed a cross from the right past a helpless Areola, and they were able to peel themselves off the ground and claim a share of the spoils.

West Ham has a mouth-watering game against second-placed Liverpool on Sunday at 4:30 pm just before the international break commence.