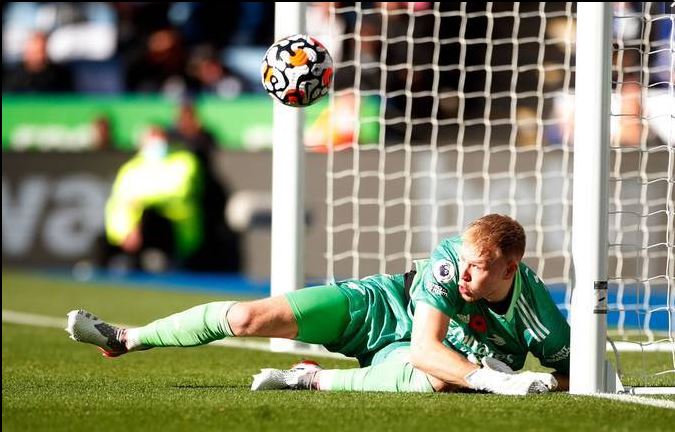 Arsenal scored two early goals in the 5th and 18th minute of play. Leicester seems to still be on the bed sleeping with the alarm bell put off.

Ramsdale continued to disprove the naysayers with a world-class save before the break, turning James Maddison’s free-kick onto the crossbar, before Jonny Evans’ rebound struck the post. 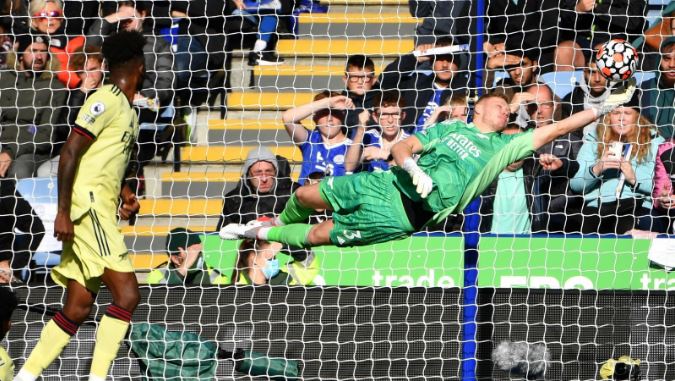 Ramsdale, whose £30 million summer transfer from Sheffield United raised questions, continued his heroics in the second half, save superbly from substitutes Ademola Lookman and Harvey Barnes, as Leicester squandered numerous clear chances to cut the lead in half.

Leicester and Arsenal start the game on the same point on the premier league table.

The Foxes has not kept a clean sheet since the opening day to wolves, their form at the King Power Stadium has been indifferent.

Arsenal has now won five of their past seven Premier League games, putting them in fifth place.

They have now gone nine games without losing in all competitions. Leicester has dropped to tenth place in the Premier League after losing for the first time in four games.

Arsenal came into the game with an unchanged team which is giving them cohesion and a good understanding between the players.

This was very evident as they dominated the game from the very kickoff, Leicester could not get out of their own half.

Saka got in behind at the byline with a little over a minute on the clock when Daniel Amartey’s touch towards his own goal had to be cleared on the line by Kasper Schmeichel, but they couldn’t hold Arsenal out for long.

Jamie Vardy attempted to clear Saka’s vicious corner, but the ball skimmed off his head and bounced off the back of Gabriel’s, soaring past Schmeichel into the far corner.

As Arsenal counterattack in numbers and at speed, Leicester was clumsy in possession, and they quickly got their second.

Saka burst down the right flank, squaring for Lacazette, and although he couldn’t get a shot off, Luke Thomas’ half clearance went nicely to Smith Rowe, who poked the ball beyond Schmeichel for his fourth goal in seven games.

The second, on the other hand, was a strong contender for save of the season. Ramsdale pushed the ball onto the crossbar from Maddison’s free-kick on the edge of the box, a save made even better by the fact that he was unsighted by the sun before Evans sprinted in for the rebound.

That rolled across the line after squirming beneath Ramsdale, but Partey was there to clear it up.

With Leicester trailing 2-0 at the break, the onus was on them to come out and attack, which they did.

Following a harmless Harvey Barnes effort, Luke Thomas attempted a far more dangerous one, but his shot sailed agonizingly wide of the post.

Then, after shots from substitute Ademola Lookman and Barnes, Ramsdale was called upon twice more.

Schmeichel came to the rescue midway through the second half, keeping out a close-range Aubameyang shot. Leicester pushed forward in response, but Arsenal held firm for their fourth league clean sheet of the season as clear-cut chances dried up.

Luke Thomas came in for the injured Ricardo Pereira in Leicester’s 2-1 win against Brentford, forcing Timothy Castagne to swap wings and play right-back. After returning from injury, Wilfred Ndidi was back among Leicester’s substitutes.

Despite the fact that Arsenal had a sickness bug going around, they were able to choose the same lineup that won 3-1 against Aston Villa, with Ben White starting in defence.

“We were so sluggish, we lacked energy, and we made it far too easy for ourselves.” We can better defend both goals.

“In the first half, we had chances. The goalkeeper made a fantastic stop and recovered quickly for the second.

“We adjusted the system that had been working well for us, and we were a lot better team in the second half.” However, we lament the beginning, and that is what you pay for.

“Today’s goals were both soft. They breeze through the pitch far too quickly. Kasper, on the other hand, didn’t have much to do.”

“We need to carry on, we haven’t done anything. We’ve won a couple of matches, we’re not where we want to be still.

“The first part of the season as part of our season. I have to put things in perspective. In that period we missed nine, 10 players in the squad.

We tried to overcome that situation, and the boys had an incredible reaction to stick together. That’s part of our season, and we should not forget that.

“I see a lot of positive things we have to maintain.”

Leicester will play Spartak Moscow in the Europa League on Thursday at 8 p.m., followed by a Premier League match against Leeds at 2 p.m. on Sunday.

On Sunday at 2 p.m., Arsenal will face Watford in the Premier League match.