In depth Match report as Liverpool repeat their Carabao Cup penalty shoot-out victory over Chelsea with another FA Cup success from the spot; Kostas Tsimikas scored the decisive penalty after Mason Mount’s effort was saved by Alisson; Mohamed Salah and Virgil van Dijk were forced off injured. 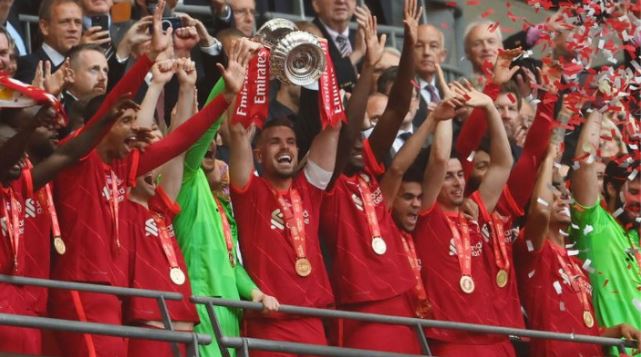 Captain Jordan Henderson Lifts the FA Cup alongside his teammates

Liverpool won their eighth FA Cup with a 6-5 penalty shootout victory over Chelsea at Wembley Stadium,thus finished with a clean sweep of the domestic cups.

Liverpool dominated the opening exchanges, and Luis Daz was at the heart of everything for Jürgen Klopp’s side going forward. The Colombian was superbly picked out by Trent Alexander-Arnold and saw his shot saved by Édouard Mendy, before Naby Keta fired wide on the follow-up.

Despite Liverpool early pressure, Christian Pulisic was inches away from giving Chelsea the lead. Mason Mount found the American at the end of a superb free-flowing move, but his shot missed the far post by an inch. Pulisic then found Marcos Alonso, who took an extra touch in the box but saw his effort saved by Alisson.

Just past the half-hour mark, Mohamed Salah was forced off injured, a worrying sight for Jurgen Klopp’s team with two weeks before the UEFA Champions League final. Diogo Jota, his replacement, nearly made an impact, only to lift his attempt over the bar after being picked out by Andrew Robertson. 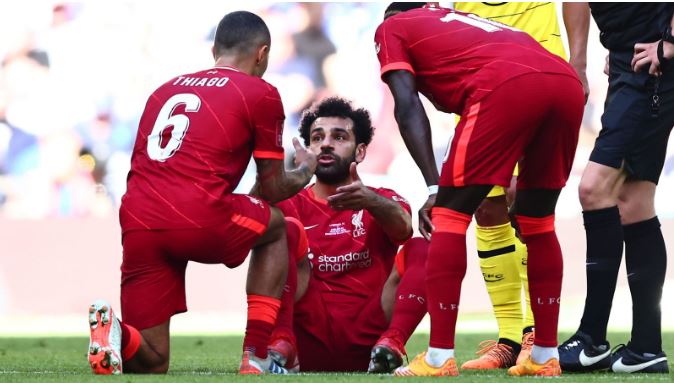 Chelsea were dominating early in the second half, and Alonso’s searching in-swinging free-kick from the right clipped off the crossbar. Diaz, on the other hand, was always dangerous, and his impressive movement created a chance on the edge of the box, where his right-footed strike went just wide of Mendy’s near post.

For both teams, it was a game of near misses, as Jota, Diaz, and Pulisic all came close again with additional efforts in both teams’ quest for an early goal. Diaz caught the outside of the post with another effort, before Robertson was also hit by James Milner’s cross.

There was still time for another effort from the Colombian, which also went wide, leaving both teams with only four shots on goal in normal time. It was the first FA Cup final since 2007 to go to extra time without a goal.

Extra time passed with little further scoring action, and a penalty shoot-out beckoned once more. César Azpilicueta missed from the penalty spot, giving Liverpool the advantage in the shootout, before Sadio Mané’s spot-kick sent the match to sudden death. Mount was the first to miss, before Kostas Tsimikas emerged as an unlikely hero, completing a clean sweep of domestic cups for Liverpool. 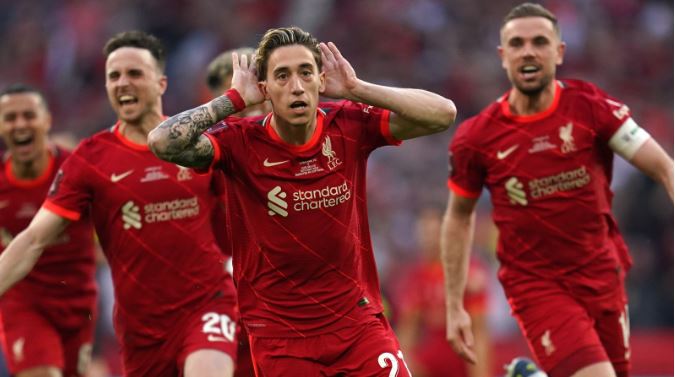 Liverpool’s victory means the club has won the FA Cup and EFL Cup this season, matching the feats of Gérard Houllier’s squad in 2000/01. Chelsea is the first team since Middlesbrough in 1996/97 to lose both domestic cup finals in the same season.

How the penalty shootout unfurl…

Klopp and Tuchel’s thoughts after the game…

Liverpool manager Jurgen Klopp:“Outstanding, it was an incredible, intense game against Chelsea – they would have deserved it exactly the same way, like in the Carabao Cup. That’s how small the margins are.

“I couldn’t be more proud of my boys, the shift they put in, how hard they fought, the early changes. I think Virgil is fine, but his muscle was hurt.

“All of these things, missing good chances, overcoming good moments from Chelsea, then having really good moments ourselves…

“Then in the penalty shoot-out, it was nerve-racking, my nails are gone but I really feel for Chelsea. For the second time, 120 minutes and you get nothing, that’s too hard. But for us I’m pretty happy.

Chelsea manager Thomas Tuchel:“Like in the last final, in the Carabao Cup, it’s no regrets. I told the team I’m proud.

“We were sure that we would be competitive and make life very difficult for Liverpool. We did it again. We struggled in the first 15 minutes but then we were excellent for the whole match.

We got to 0-0 against maybe the best attacking team in the world and we also created a lot of chances. We deserved it, as they deserved it as well, but again we lose on penalties.

“We are very disappointed of course. We are sad but at the same time proud.

“I was sure we would win today. I was sure before and I was sure during the match that momentum was on our side. I was sure until the very last minute but unfortunately I was not right. I have to digest it and keep on going. That’s life in sports.

“We have everything it takes to win trophies, we proved it. We have a Club World Cup and a European Super Cup and I don’t feel sorry this was at the beginning of the season and in winter.

“We were good in Champions League, strong in both domestic cups, we can produce peak performances and we have the mentality in the club to shape the mentality of the players, but Man City and Liverpool have shown you need this on a consistency.”