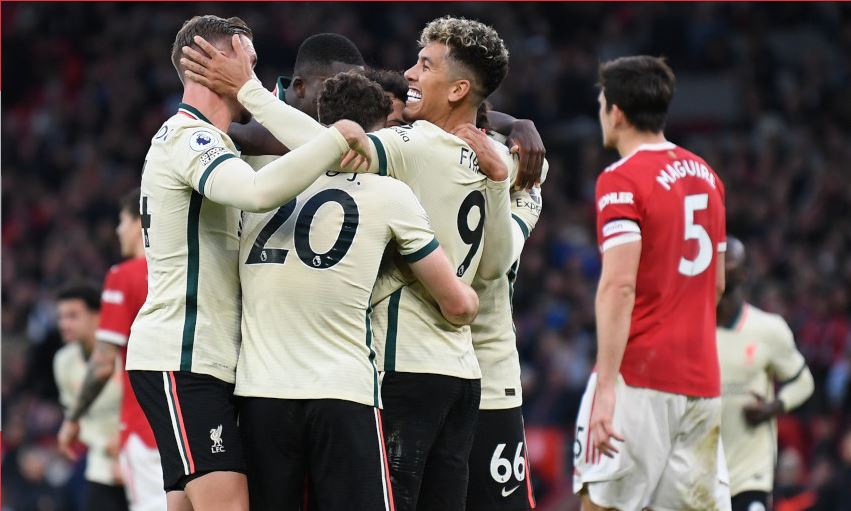 By the 49th minute of Sunday’s Premier League match at Old Trafford, Mohamed Salah’s quickfire hat-trick, which came after early goals from Naby Keita and Diogo Jota, had put the Reds five goals up that crushed a lacklustre Man Utd team. 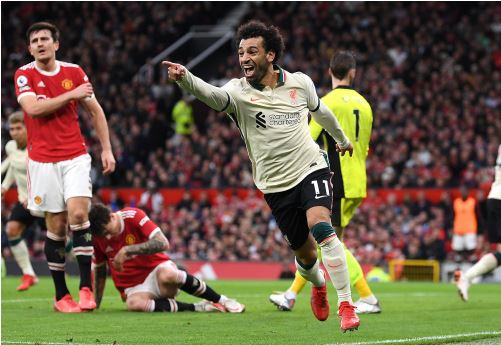 Liverpool crushed Man Utd at  Old Trafford on an unforgettable afternoon in the Premier League. Every Reds fan all over the globe will savour this victory for a very long time.

Liverpool coped with an early scare Man Utd when Bruno Fernandes smashed wildly off-target, got off to a flying start, scoring twice in the first thirteen minutes. After being teed up by Salah, Naby Keita scored the first goal, then Diogo Jota sneaked in at the back post to convert Trent Alexander-cross. Arnold’s.

Indeed, the only blemishes on an otherwise immaculate afternoon were injuries to James Milner, who went down possibly with a hamstring issue, and Keita, who was stretchered off following a two-footed lunge for which Paul Pogba was sent off on the hour.

Despite Man Utd lacklustre display,  they still offered a threat moving forward, with their finest chance coming from a stinging Mason Greenwood shot on goal, which Alisson saved quickly.

Salah added third and fourth goals before the break, first converting from Keta’s front post cross before being left in acres of open and tidily finding the bottom corner from inside the area.

Hundreds of Man Utd fans did not bother to return to their seats after the halftime break, booing Ole Gunnar Solskjaer and his lacklustre Man Utd team.

Within five minutes of the restart, Salah scored his third goal, clipping over De Gea from within the box to make it 5-0. To add salt to the wound, Cristiano Ronaldo’s consolation goal was thrown out for offside, and substitute Paul Pogba was given a straight red card, upgraded from a yellow following VAR intervention, for a brutal attack on Keita that saw the midfielder stretchered off.

MUST READ:  Man Utd sits top on the EPL table after a comfortable victory over Newcastle

De Gea saved a sixth goal for Alexander-Arnold by tipping a thunderous 25-yard effort over the bar, while Edinson Cavani summed up lacklustre Man Utd’s afternoon by hitting the crossbar from inches out.

Liverpool has leapfrogged Manchester City into second position in the premier league standing, one point behind Chelsea in the title battle and seven points ahead of Man Utd, who are currently in seventh place.

Klopp made two changes from the midweek triumph over Atletico Madrid, starting Ibrahima Konate and Diogo Jota in place of Joel Matip and Sadio Mane.

Due to a knock picked up in Spain, Fabinho was unable to participate.

Ole decided to keep the same lineup as the one that defeated Serie A side, Atalanta, in the mid-week champions league match, with Fred and Scott McTominay in midfield alongside playmaker Fernandes.

As expected, Cristiano Ronaldo leads the attack as the Reds seek to take the game to Jurgen Klopp’s side.

Manchester United manager Ole Gunnar Solskjaer says the team  5-0 loss to Liverpool is his saddest day as a manager and that the team must move on as swiftly as possible.

Liverpool boss Jurgen Klopp is overjoyed following Liverpool’s crushing of Manchester United at Old Trafford, and reveals he’ll celebrate with a drink — but only one!

NEXT UP FOR MAN UTD…

It doesn’t get much easier for Man Utd in the coming weeks as they try to maintain their Premier League title chase and qualify for the Champions League next round, with games against Chelsea, Arsenal, Tottenham Hotspur, and the Manchester derby on the horizon.