Liverpool 6-0 Leeds Utd: Mo Salah, Sadio Mane both grab a brace while Joel Matip and Virgil Van Dijk scored one each to give the Reds an emphatic win over the ‘whites’, they are fast slipping into the relegation fight.

In-depth match report as Liverpool continued their winning run with a ruthless 6-0 win over hapless Leeds Utd; the win sees the Reds cut Manchester City’s lead at the summit of the Premier League table to three points. Leeds was never a threat to Liverpool in the entirety of the game, they were outclassed by the Reds. 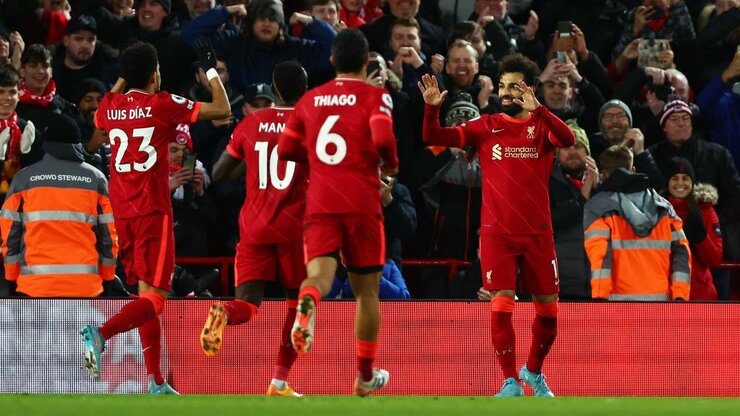 Liverpool cut City’s lead to three points, Jürgen Klopp’s team knew that a win today would put them just three points behind league leaders Manchester City. When the ball struck Stuart Dallas’ arm inside the area in the 13th minute, they were awarded a penalty. To score the surging ‘Reds’ 65th league goal of the season, Mohamed Salah simply stepped up and sent Illan Meslier the wrong way.

MUST READ:  Arsenal's Jesus and Martinelli called up to Brazil's 26-man team for Qatar 2022

Liverpool had not allowed a goal in the first half in their previous nine games, so Marcelo Bielsa’s side had their job cut out for them. Midway through the half, Leeds caught the ‘Reds’ backline out, but Raphina’s close-range tap-in was ruled out for offside.

After driving forward into the box and collecting an amazing through pass from Salah, Klopp’s team quickly increased the pressure and added a second goal in the 30th minute with Jol Matip blasting in. The Egyptian international added a second goal to his account minutes later, scoring from the penalty spot once more to effectively end the game before the half-time whistle had even been blown.

After the interval, the ‘Whites’ made a double change in an attempt to stop their losing streak, as they were on the verge of suffering their third Premier League defeat in a row for the second time this season. Despite posing a threat at times, they were unable to maintain their lead in the last third.

MUST READ:  MrMacaroni visit School he had his Nursery and Primary education(Photos)

In the 61st minute, Salah came close to completing his hat-trick, but his left-footed effort sailed over the bar in front of The Kop. Liverpool were comfortable on the ball late in the game, adding a fourth, fifth, and sixth goal as a Sadio Mané brace and a Virgil van Dijk header rounded off a straightforward victory for the title contenders.

For the first time since January 2020, the ‘Reds’ have won nine games in a row after this triumph. Leeds, on the other hand, have already conceded a league-high 35 away goals and are in danger of relegation.

Leeds Utd boss Marcelo Bielsa made two changes Junior Firpo and Raphinha both make the starting line-up, replacing Diego Llorente and Robin Koch – who is following concussion protocols after their fixture against Manchester United in which they lost 4-2.

Illan Meslier is between the posts for the ‘Whites’.Kalvin Phillips, Patrick Bamford, Liam Cooper, Leo Hjelde and Robin Koch all miss out this evening, as they recover from recent and longer-term injuries.

Before the interval, the Egyptian could have had a hat-trick, but he still had three-goal involvements, converting two penalties and assisting Joel Matip, as well as playing the incisive pass for Mane that led to the second penalty kick.

Liverpool plays Chelsea in the Carabao Cup final on Sunday at Wembley Stadium kick-off at 4:30 pm.