In-depth match report as Manchester City twice took the lead through captain  Kevin De Bruyne and Gabriel Jesus but was pinned back by in-form Diogo Jota and Senegalese Sadio Mane as Reds maintain the pressure on the leaders in this chase for the Premier League title.

Manchester City and Liverpool played out a 2-2 draw in the Premier League, the two title chasers battled it out in search of an advantage in the title race but had to settle for a point each at the Etihad Stadium. 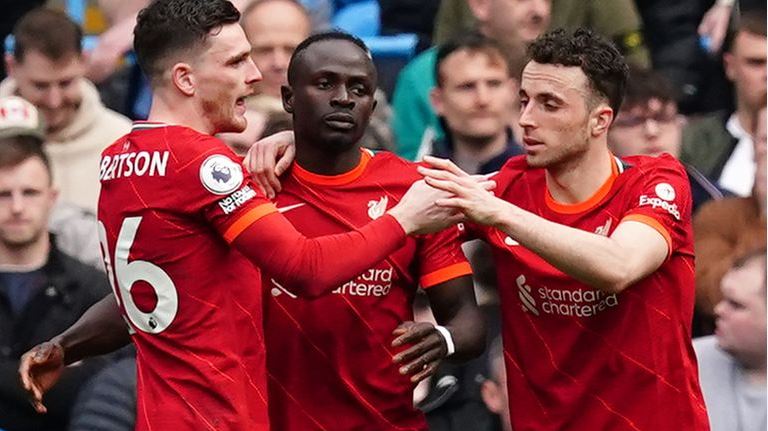 Mane celebrates his goal with Robertson and Jota

Man City piled pressure on Liverpool’s goal, and Raheem Sterling’s early warning sign was ignored by the Reds’ defence, as Kevin De Bruyne’s deflected effort fooled Alisson and bounced in off the post moments later. City’s lead, however, did not last long, as Liverpool responded in what was their first real foray into City territory. Trent Alexander-Arnold maintained his cool to deflect Andy Robertson’s cross down to Diogo Jota, whose effort squirmed beneath Ederson.

Kevin De Bruyne, on the other hand, is City’s big-game man, and after scoring the game-winning goal in their midweek UEFA Champions League win, the Belgian should’ve doubled his tally for the afternoon when his deft turn opened him up a yard in the box, but his effort could only brush the side netting. Fortunately for City, they didn’t have to wait long for the next opportunity. Gabriel Jesus, who was given the freedom of Manchester to fire City into a halftime lead, made no mistakes this time. 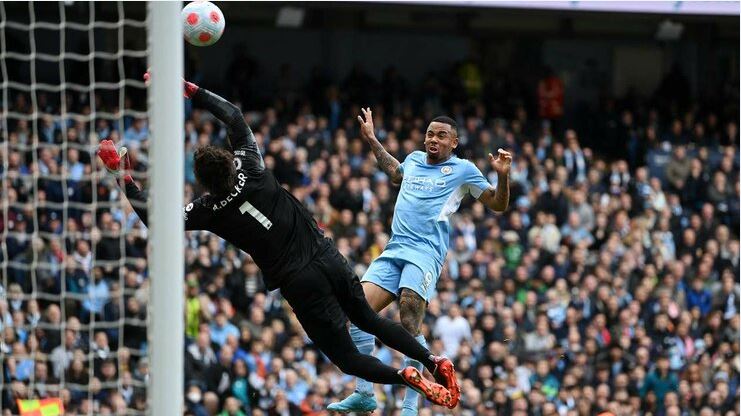 City’s half-time lead was gone less than a minute later when a lapse in City concentration allowed Mo Salah to caress an inch-perfect pass through to Sadio Mané, who finished with a calmness past Ederson on his 30th birthday. Sterling was determined not to make the same mistake he had made in the first half, and he thought he had given City a 3-2 lead, but VAR had other ideas and adjudged the former Liverpool man to have strayed offside in the build-up to the goal.

After seeing Riyad Mahrez’s free-kick fly wide of Allison’s post in the final minute, before the Algerian overhit a wild shot with the game’s final chance, a point may suit Liverpool more than City, though it does little to boost either side’s title hopes. Simply put, with seven games remaining, everything is still up for grabs.

enomaomoruyi man of the match:

Pep Guardiola: A good game but I feel it’s an opportunity missed

“It was a good game. I will have to review the game but I have a feeling we missed an opportunity. A feeling that we left them alive.

“Heads up, I said to the team after the game, I don’t want one second of sadness. It was a good game for our fans, Liverpool fans, fans in the UK and around the world. We dignified the Premier League.

“We created a lot against them, except for maybe the last final action. It was an incredible performance, I am so proud of my team.

“We know now that we have to win every game.

Jurgen Klopp: We have to be nearly perfect

“If we win today, we are two points up, that changes nothing. We have to be nearly perfect to beat this team in a game and over a season too.”

Asked further on whether he agreed that his team would now have to win every single remaining game to lift the Premier League title, Klopp agreed.

“I think that is probably right. We knew it in January. We had to win 18 games. If there was one we could draw it was today.

“We have to be pretty much as close to perfection as possible to win seven Premier League games which is insane but that is the only way to beat this team. If it is enough.
“Because they might win seven as well.”