Resurgent Liverpool: Reds go up to second place thanks to Fabinho, Alex Oxlade-Chamberlain, and Takumi Minamino.

Liverpool hit Brentford 3-0:Match report from the Premier League clash between Liverpool and Brentford at Anfield, Jurgen Klopp’s team has cut Manchester City 13 points lead in the table to 11 points and has a game in hand. Also, the Reds has displaced Chelsea from the second position on the table.

Liverpool hit Brentford 3-0:With goals from Fabinho, Alex Oxlade-Chamberlain, and Takumi Minamino, Liverpool moved up to second place in the Premier League table after a comfortable win over Brentford at Anfield on Sunday.

Manchester City’s win against now-third-placed Chelsea on Saturday highlighted the defending champions’ supremacy in the title race, but Liverpool completed the weekend where they began it: 11 points behind City with a game in hand and a trip to the Etihad yet to come.

With Fabinho’s back-post header from a corner a minute before half-time, Oxlade-diving Chamberlain’s effort in front of The Kop on 69 minutes, and a gift for birthday boy Minamino (77), they kept their dim chances of catching Pep Guardiola’s team alive.

On the 58th minute, Bryan Mbeumo almost equalized for Brentford, but his effort was just falling away as he hit it after turning Joel Matip, and Liverpool finally closed off the game after Diogo Jota had hit the post and been denied by a superb save from Alvaro Fernandez.

After putting Brentford under relentless pressure for most of the first half and forcing Fernandez into a superb save from Virgil van Dijk after Jota and Trent Alexander-Arnold fired attempts over the bar early on, Fabinho’s opening was no less than the home side deserved. 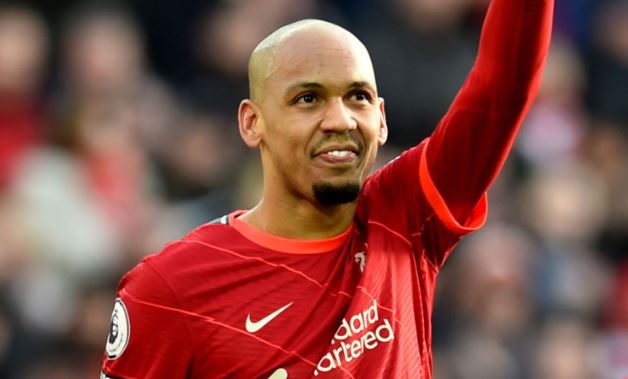 The visitors seemed to have weathered the storm well and, with the help of some errant passes from Alexander-Arnold and Matip, caused some issues of their own as the half progressed, with Vitaly Janelt and Ivan Toney firing wide.

When Oxlade-Chamberlain met Andy Robertson’s wonderful cross, Brentford’s first league game away at Liverpool since 1946 was doomed to finish in a loss.

Unfortunately for the midfielder, he was forced off soon after with an injury, but a poor pass out from Fernandez allowed Roberto Firmino to pounce and tee up Minamino – who turns 27 today – for a simple third, keeping Liverpool in touch despite the absences of key players Sadio Mane and Mohamed Salah.

Brentford, who finally got a shot on target in second-half stoppage time, suffered their fourth defeat in five league games – and it could have been worse had Minamino finished a late chance – but they remain in 14th position, 10 points clear of the relegation zone.

By his standards, he’s having a purple patch, and his close-range header got his team going on Sunday, eventually giving Liverpool the lead at the end of a dominant first half.

But it wasn’t just about his goal; Fabinho’s play in the centre of the pitch was excellent all-round. He led Liverpool in passing accuracy, chances created, duels won, aerial duels won, and interceptions among starts.

Essentially, this was a performance that proved why he is such a crucial member of this team. He may not always make the news, but he will if he keeps this scoring streak going.

Following Liverpool’s struggle to break down Arsenal’s 10 men in the Carabao Cup semi-final first leg on Thursday, Jurgen Klopp was constantly questioned about the absence of Mohamed Salah, Sadio Mane, and Naby Keita, who are all at the Africa Cup of Nations.

He felt more at ease discussing the subject after witnessing his team defeat Brentford by three goals despite missing two of their key attackers.

“[The 3-0 win] is really helpful, to calm these discussions down,” he said. “I understand the question and thoughts behind it but for us, it makes no sense because they’re not here – like others with injuries – and we don’t want to talk constantly about the boys who aren’t in.

“We have to find ways to break opponents down. Today we did that particularly well and I’m really happy about that.”

Jurgen Klopp also described himself as “happy” to have reached the milestone of 350 games in charge of Liverpool.

In that time he has won the Premier League and the Champions League – but he insisted he still has plenty more to achieve at Anfield.

“When I look back at the pictures [of when I joined in October 2015] I look completely different so obviously it was quite an intense time since then! You invest a lot here,” he laughed.

“But each little thing you do is really worth it because of the size of this club and how emotional the club is and how big the club is and how close we are to each other. It becomes family. You don’t get an opportunity very often [to stay at a club a long time as a manager], I’m lucky I’ve had that happen a couple of times.

“I’m really happy about the story we’re writing but in my opinion, we’re far away from finishing the book so we have to keep writing.”

On the title race, he added: “We don’t have to convince anybody outside. If they want to believe, they can believe. I think people are with us; they want to enjoy the ride and go for it as much as they can. We will try otherwise we have nothing to do.”

Brentford manager Thomas Frank was happy with his team’s performance against Liverpool and believes it gives them confidence going into the second half of the season.

“It was in corners they were dangerous from and we had these opportunities you need to take if you’re playing at Anfield. If we go to half-time 0-0 it’s a different story. We knew if we wanted to get points here we can’t compete on a set piece.

“Second half, still brave, still front-footed, good chance for Mbeumo but what a cross, what a finish [for Liverpool’s second goal]. That finished the game off.

“What I will take from this is the first half performance, which will give us a lot of hope for the rest of the season.”

Liverpool faces Arsenal in the second leg of their Carabao Cup semi-final on Thursday kick-off at 7.45 p.m. Brentford will play Manchester United in the Premier League at 8 p.m. on Wednesday.

Related Topics:Liverpool Updates
Up Next

Pierre-Emerick Aubameyang dismiss ‘untrue talks’, ahead of his return to Arsenal