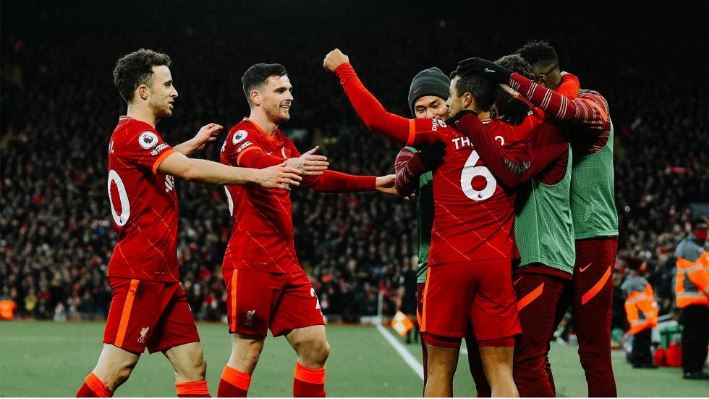 Liverpool beat Southampton 4-0 at Anfield, scoring two or more goals for the 17th game in a row, a feat previously accomplished by a top-flight team in 1927.

Liverpool faced a Southampton team coming off a 2-1 loss to Norwich City, looking to extend their home unbeaten streak to 16 games. The ‘Reds’ got off to a great start in their quest to continue their unbeaten streak, scoring within the first two minutes.

The goal was scored by Diogo Jota, but most of the credit goes to Andrew Robertson, who broke in behind before cutting the ball back for his teammate to tap in for the Premier League’s fastest goal thus far.

Armando Broja’s one-on-one attempt forced Alisson Becker to save from close range in a caution sign for Reds. Diogo Jota scored his second of the game just moments later, knocking home from Mohamed Salah’s cross across the face of goal for Reds 700th goal under Jürgen Klopp.

Thiago Alcântara scored his second goal in as many games in the 37th minute, deflecting a deflected shot past a helpless Alex McCarthy.

After seeing his team get blown out in the first half, Ralph Hasenhüttl tried to shake things up at halftime by bringing in Nathan Redmond and Nathan Tella. Virgil van Dijk’s first goal since returning from injury – a volleyed attempt into the corner in the 52nd minute – did not make the expected difference, as Liverpool extended their lead.

From then, Liverpool maintained their dominance, with Jota getting the closest to extending the lead from close range, but missing out on a hat-trick opportunity.

The ‘Reds’ won comfortably and move to second on the Premier League Log, one point behind  Chelsea who sits at the top. Southampton, however, is now 14th in the table, barely five points clear of the dreaded relegation zone.

Liverpool made three changes from the 4-0 win over Arsenal as Konate, Henderson and Robertson came into the starting eleven for Oxlade-Chamberlain, Tsmikas and Matip, who all moved to the bench.

Southampton also made three changes as Lyanco, Perraud and Broja came in for Walker-Peters, Elyounoussi and Diallo. Lyanco was making his first Premier League start.

BOTH MANAGERS THOUGHTS AFTER THE MATCH…

Liverpool manager Jurgen Klopp: “The game went completely in our direction. We controlled the game pretty much. I said after the game to the boys, it was 4-0, what do I have to moan about?

But we can and have to do much better. [Alisson’s] saves were too spectacular. But of course, a lot of things were really good.

“We had a lot of good football moments today, and I think the people enjoyed it. It was cold here today, so we gave them a bit of warmth I think!”

On Diogo Jota: “Exceptional player exceptional boy. He’s the perfect signing because he has everything that a Liverpool player needs in this squad. The technical skills, the physical skills, and he is very smart and can learn all the tactical stuff pretty quick. He can also play all positions. So it was very helpful, he has the speed and direction to finish situations off. His goalscoring record is pretty impressive.”

MUST READ:  Rangers sign Aaron Ramsey on Loan from Juventus

Southampton manager Ralph Hasenhuttl: “The first half was simply not good enough to be competitive against this team. We tried a different way of defending, and it was absolutely not working. Second half we changed to our normal behaviours.

“They are on fire at the moment, you must say. We had chances, we can score, but it’s only a question of time when they speed up the game today. I think there was no chance today after the start we had.”

Liverpool travels to Everton on Wednesday night at 8.15 p.m., while Southampton hosts Leicester at 7.30 p.m both fixtures are in the Premier League.