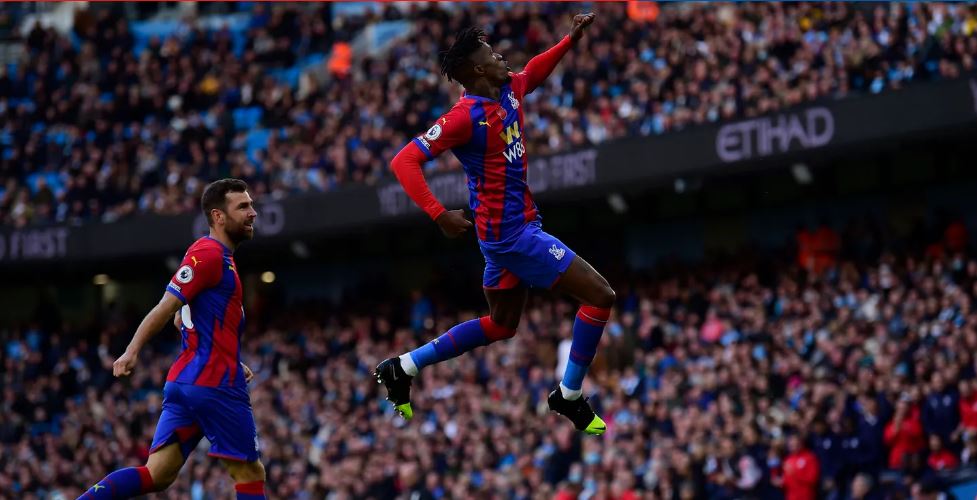 Crystal Palace stunned reigning champions Manchester City 2-0 to strengthen their chances of finishing in the top half of the table for manager Patrick Vieira’s return to the Etihad Stadium.

As Pep Guardiola’s high-pressing Manchester City side attempted to gain momentum, sky-blue shirts harried the visitors from the start, but Crystal Palace wasn’t hesitant to push forward themselves and began seeking for possession. It soon began to pay off.

Wilfried Zaha pounced on a stray pass in the Man City half and worked the ball out to Gallagher in support. The midfielder pulled the Man City defender before sending Zaha back in for a one-on-one with Ederson, which he finished well.

It was only fair given their quick start, and the pressure mounted as Man City attempted to reply. Kevin De Bruyne and Jack Grealish bobbed and weaved in search of an opportunity, but Palace’s defence stood firm, much to the chagrin of a growing number of home fans.

Vicente Guaita held on to a powerfully hit volley from Rodri after Palace failed to clear a corner as the game approached the half-hour mark.

Gabriel Jesus gained space on the right shortly after, and a flurry of desperate Palace blocks prevented him from putting the ball into the six-yard box. However, despite their possession, there were uncharacteristic gaps in focus from sides that were generally so precise in their passing.

Palace’s defending had to be flawless whilst Man City’s passing was haphazard. Grealish suddenly discovered the pocket of space in the penalty area that he had been looking for all day. He made a good spin, but just as he was about to fire the trigger, Marc Guehi dashed across the field with a wonderfully timed tackle to steal the ball.

As the seconds ticked past, the Man city continued coming, and wave after wave of onslaught was repulsed. Then, as halftime approached, Edouard nodded a pass to Zaha. Andre Marriner was quick to brandish the red card after the Ivorian turned Aymeric Laporte and appeared to be through on goal before the defender brought him down.

The second half got off to a frantic start. Man City, eager to make amends, showed no signs of their man advantage as they attempted to catch Palace off guard. Grealish was the dangerman once more, this time bursting down the left flank and laying the ball back to Rodri, who flicked the ball over the crossbar when he could have scored.

Crystal Palace, on the other hand, appeared equally threatening with more space to exploit when breaking forward. Early in the second half, they broke forward twice, the first time finding Ayew on the right flank to lay the ball back for the onrushing McArthur, whose first-time shot was far over the bar.

Gallagher won a free kick on the touchline moments later. Guehi rose highest but could only nod over the crossbar as his effort was blasted in towards the far post.

Despite the red card, Man City showed no signs of slowing down as they pushed forward via Grealish once more. This time, Jesus was the target, clearing the way for the shot but only stinging Guaita’s palms.

MUST READ:  There are no plans to stop the Premier League

Man City felt they were level after a few moments. Foden moved away from Ward and found out Jesus at the far post, who stabbed home from a tight angle, after controlling a long ball over the top with excellent individual technique.

The relief that swept the Etihad Stadium was short-lived, as VAR determined the goal to be barely offside.

Palace may have doubled their lead if the game had opened up. Zaha had the ball in the back of the net before being disallowed by a late flag. Ayew, on the other hand, had the best chance, cutting inside at speed to create a shooting space twelve yards away but blazing over the crossbar.

On the other end, Jesus was nodding over the top from close range, his head in his hands once more.

Man City’s pressure increased, although neither side’s opportunities were of equal quality. Gallagher got space to shoot hard once more while wandering forward, but Ederson was able to press behind him.

However, Crystal Palace’s substitution of Michael Olise in the closing stages was enough to guarantee that they took advantage of their chance to break forward in the end. He dragged two Manchester City defenders down the right flank and slipped in Zaha.

Zaha was pushed outside, but he found Olise again, who laid it off for Conor Gallagher to score his second goal. All of Palace’s hard work had paid off, and the travelling fans were in ecstasy.

This was a huge victory for Patrick Viera’s team.

WHAT BOTH MANAGER’S SAID AFTER THE GAME

Man City boss Pep Guardiola: It could be yellow or red,” he said of the Laporte incident. “It depends on the referee and what he thinks.  The goal, I imagine the assistant referee says he’s offside.

“We didn’t lose because of that. We conceded the first goal and we weren’t able to score a goal but after that we really good and for 25-30 minutes of the second we were good.

“But when you play 50 minutes 10 against 11, it is difficult for a team like us because you need the process and to do everything right.

“The players showed character and tried, but unfortunately many, many things went wrong and we lost the game.”

Crystal Palace boss Patrick Viera: “I think this is what we needed,”

“We were really pleased with the way we played in the last couple of games, but we weren’t happy with the goals we conceded.

“Today, we were concentrated from the start until the end. Coming to Manchester City and not conceding a goal is a really strong statement and is really good for the team.

“It was really stressful, but at the same time, we knew any game against Man City would be challenging. But today we showed character, resilience, and I’m really pleased for the players because on the field they gave everything.