Manchester City 2-0 Brentford: Goals from Riyad Mahrez and midfield maestro Kevin De Bruyne in each half sealed all three points for the reigning Premier League champions at the Etihad Stadium.

In-depth match report and reactions from Man City 2-0 victory over Brentford that sees City moved 12 points clear above Liverpool in the Premier League; City cruised to 10 wins in a row at the Etihad stadium. The reigning Premier League champion has played two more games than Liverpool in the second position. 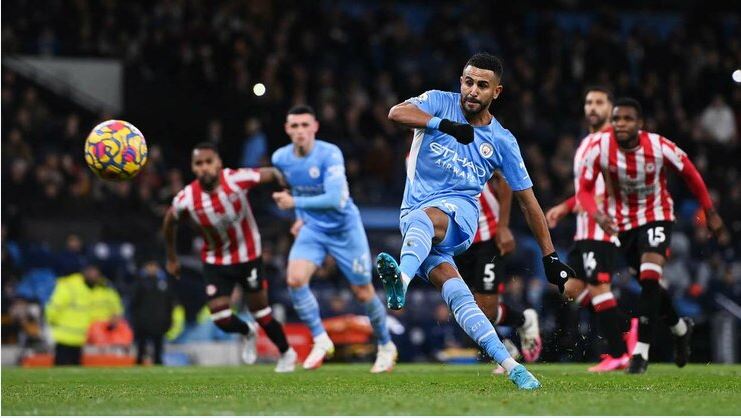 Manchester City regained their winning ways and extended their lead over Liverpool to 12 points, despite having played two more games. Riyad Mahrez and Kevin De Bruyne scored in each half to give the Etihad Stadium its 10th win in a succession.

Man City 2-0 Brentford: The ‘Bees’ knew it was critical not to lose the opening goal since their opponents Man City had won on each of the 17 occasions this season when they had taken the lead. For a squad that hasn’t maintained a clean sheet in 13 games, the visitors showed tremendous tenacity for lengthy stretches of a half in which they had less than 20% possession.

As good as it got for Manchester city a floating De Bruyne freekick glanced down into the path of Aymeric Laporte, who stroked narrowly wide with his unfavourable right-foot.

That was until City’s hard work was undone by Mads Roerslev Rasmussen’s penalty. When Sergi Canós failed to clear the ball, Roerslev collided with Raheem Sterling as he appeared to be running down a blind alley, leaving referee Darren England with little choice but to award a penalty. Mahrez went up and easily sent David Raya the wrong way for his 16th goal in all competitions after scoring in six straight games.

In the second half, Man City dominated against a squad that lacked firepower without prolific scorers Ivan Toney and Bryan Mbeumo. Joo Cancelo came near on two occasions, first from distance and then after slaloming through a field of defenders, but lacked conviction in his finish.

Man City scored in the 68th minute, capitalizing on another unforced blunder while attempting to play out from the back. Sterling should have scored after Raya’s pass, but the rebound dropped pleasantly for De Bruyne, who passed home for his 75th City goal.

Man City has now won 18 straight league games on Wednesdays, with 12 clean sheets along the way. Meanwhile, the ‘Bees’ have lost five consecutive games for the first time since 2007, and are currently only six points clear of relegation, despite having played more games.

The full-time result at Etihad Stadium is Man City 2-0 Brentford.

REACTIONS AFTER THE GAME

“They are so difficult to attack. Aggressive, high pressing, we build up they drop and defend so deep. Be patient, make no mistakes and in the end, we got the result.

“Very satisfied with the performance. We conceded one shot, a few corners and were patient. Difficult when they defend deep with 10 players in their 18-yard box.”

On the title race the Spaniard said:

“Liverpool have two games to play then we see the gap – 14 games to play, many points to play for and more tough games like today.

“Everyone is tough competition, but it is impressive at this stage to have 60 points – we have done incredibly well so far.”

This win stretches City’s lead at the top of the table to 12 points, but Raheem Sterling’s focus remains on the next game, rather than what might happen at the end of the season.

“It’s another game, we move on step by step, that’s all we can do – keep trying to win and not looking at anyone else.”

RESULTS FROM OTHER GAMES SAME DAY