Manchester City 3-2 Aston Villa: The Premier League title was won after Cityzens came from two goals down to defeat Villa at the Etihad Stadium. 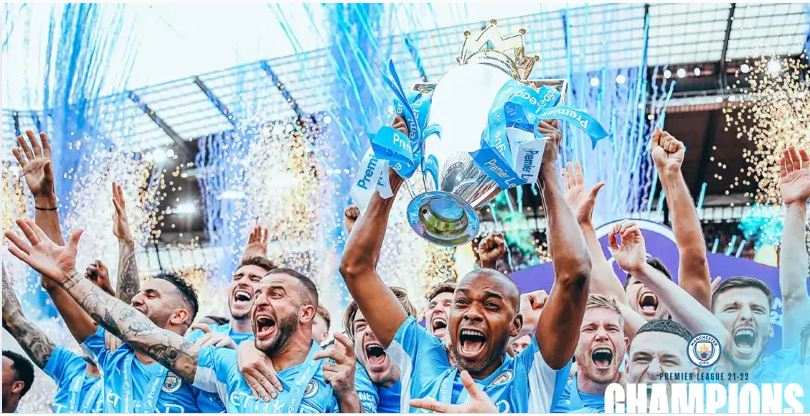 Man City wins PL title ate in the game, three goals in five minutes by substitute Ilkay Gundogan turned the game – and the title race – on its head. Liverpool’s late win over Wolves meant that only a win would have sufficed for City.

It was an extraordinary way to do it, almost as remarkable as Sergio Aguero winning the title in stoppage time a decade ago. When Philippe Coutinho added to Matty Cash’s opener midway through the second half, City looked defeated.

Steven Gerrard, the manager of Aston Villa, was set to add to his Anfield legend. Instead, it was Pep Guardiola and his players who celebrated ecstatically after the final whistle at the Etihad. Twists and turns were to be expected. But certainly not this.

With so much on the line, there was a charge to the occasion, with fans gathering outside the Etihad Stadium hours before kickoff and the City team bus being greeted by an army of passionate fans and blue smoke.

The atmosphere as the teams took to the field was also electrifying, with the Etihad also bidding a fond farewell to Club captain Fernandinho after nine fantastic years of service.

And Villa sent a clear message that they weren’t just there to make up the numbers, with Fernandinho’s timely early intervention denying Brazilian compatriot Philippe Coutinho a clear header on goal.

They also limited time and space as Pep Guardiola’s team attempted to convert territory and possession into the crucial goal.

Emiliano Buendia broke into City’s half first, before feeding the onrushing Lucas Digne on the left flank.

The Frenchman sent a pinpoint dipping cross into the box, and fellow full-back Cash was there to head home past Ederson.

With the visitors on top, it took a superb challenge from John Stones to deny Ollie Watkins after the England striker had eluded Fernandinho.

A tense afternoon had suddenly become even tenser, and despite City’s pressing and harrying, Villa remained dogged and resolute, throwing bodies on the line to try and deny us.

After the break, City changed formation, with Oleks Zinchenko replacing Fernandinho, Stones moving to centre half with the Ukrainian on the left side of the defence, and Cancelo switching to right full-back.

His charge created a sliver of space on the right side of the box for Phil Foden, whose shot was deflected agonizingly wide.

However, it was Villa who broke the deadlock at the Etihad, scoring on a breakaway in the 37th minute through Matty Cash.

But first, there was the matter of navigating the most important 90 minutes of the season as City sought the win that would secure their fourth Premier League title in five years.

And Zinchenko almost made an immediate impact with a superb twisting mazy run that nearly found Jesus before the Brazilian saw a close-range shot fizz over.

The tension was almost unbearable as the game entered the fourth quarter, with half an ear trained on events at Anfield.

Guardiola made substitutions, bringing on Raheem Sterling and Ilkay Gundogan in an attempt to find a gap.

Villa, on the other hand, scored what appeared to be a decisive second goal 21 minutes from time through Coutinho.

The Brazilian latched onto a high ball on the City box’s edge and ran around Aymeric Laporte before firing a low shot past Ederson and inside the near post.

Sterling and Gundogan combined to close the gap 15 minutes from time, with the German heading home his fellow substitute’s inviting arcing ball from eight yards. 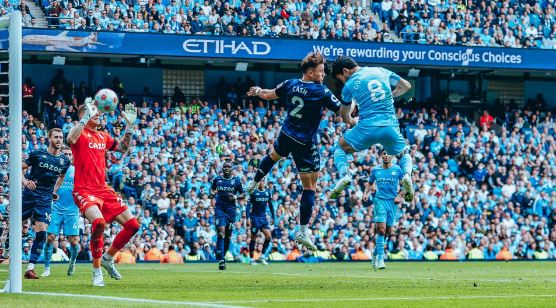 Within two minutes, the Etihad had descended into chaos as City drew level. 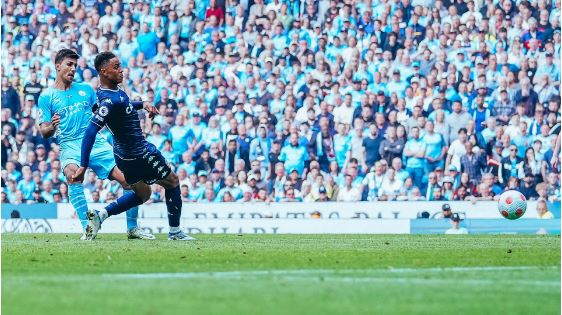 This time, it was Zinchenko who broke down the left channel before intelligently cutting the ball back to the waiting Rodri on the edge of the box.

It would have been tempting to shoot, but the Spaniard instead fired a low shot that rifled into the net’s corner, causing wild scenes.

But that was nothing compared to what happened two minutes later when Gundogan scored his second and our third goal of the game.

It sparked scenes of ecstasy and mayhem on the field and sidelines, but there was still work to be done, especially after Liverpool defeated Wolves 3-1.

But, with the atmosphere at an all-time high and City fervent fans acting as a 12th man, the home team ran the clock down to secure the most dramatic but richly deserved Premier League title win.

De Bruyne was the architect, as usual, latching onto a loose ball and driving into the heart of the Villa box.

The Belgian then sent in one of his trademark curling balls, and Gundogan was waiting for it at the far post. 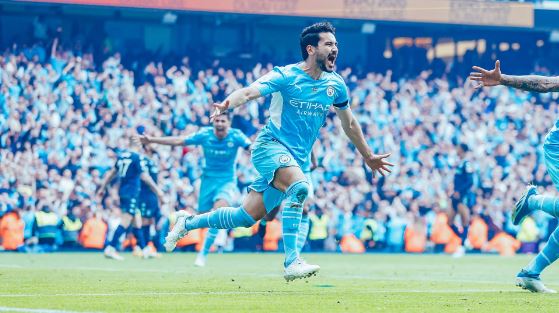 Thoughts of Man City boss after the game

“The last game is always special, a lot of emotions. The moment we scored the goal it changed everything.

“I told them it is normal, but you have to handle it. Oleks gave us a lot in the second half. We scored the goal and got the momentum and our fans did the rest.

“Ilkay Gundogan is the best runner in second positions that we have. We arrive at the sides with Joao and Oleks. And we have people with the sense of tempo in the final third- but he is the best.

“We are legends. When you win four titles in five years then it’s because these guys are so special. We will be remembered. We won with 100%, the second one at Brighton, winning at home with our people is the best.

“The moment we scored and equalised quickly we had a feeling that we had the chance to score the third.

“Today I have no energy to think about next season. We are champions again! We will defend our crown again and again.