in-depth match report, analysis and reactions as Man Utd secured a thrilling 4-2 win at Elland Road against Leeds Utd to tighten their hold on fourth place in the Premier League; Goals from Harry Maguire and Bruno Fernandes saw visitors take the lead; Leeds Utd responded with two quick-fire goals before Fred and Elanga sealed all three points for Utd. 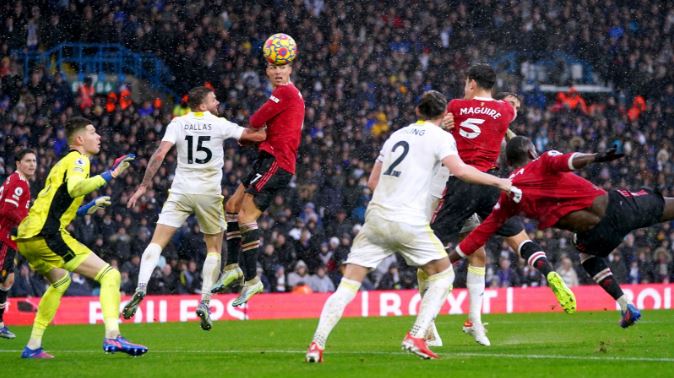 Manchester United’s 4-2 triumph at Elland Road against Leeds United on Sunday marked the club’s 700th Premier League victory, making them the first to do so.

Man Utd reach 700th PL win at Elland Road against struggling Leeds Utd thanks to goals from Fred and Anthony Elanga in the second half, after goals from Rodrigo and Raphinha had balanced out Harry Maguire and Bruno Fernandes’ first-half headers.

And United fans will be thrilled that Rangnick’s team hit this historic milestone in such a pivotal match.

Man United knew they couldn’t afford to drop points in the race to finish in the Premier League’s top four after wins for Tottenham and Arsenal on Saturday, and after withstanding plenty of early Leeds pressure, the ferocious Elland Road atmosphere, and the sodden conditions, the visitors grew into the game.

They should have taken the lead in the 26th minute when Cristiano Ronaldo squandered a golden opportunity to score. Paul Pogba beat Adam Forshaw to a low cross that seemed like it would be tapped in by Cristiano Ronaldo, but Illan Meslier showed excellent reactions to keep the score equal.

Man United, on the other hand, quickly silenced the home crowd when they finally scored from a corner at the 140th attempt. Diego Llorente was beaten by Harry Maguire, with the under-pressure United captain smashing home a header and turning away to celebrate in front of the Leeds supporters.

MUST READ:  A gas pipeline explosion in Delta State has caused a scare

After Jadon Sancho’s excellent cross teed up Bruno Fernandes to head home to make it 2-0 at half-time, the visitors would celebrate again deep into six minutes of stoppage time.

Leeds, who had previously replaced Robin Koch with Junior Firpo due to a head injury, made a double substitution with Raphinha and Joe Gelhardt replacing Jack Harrison and Llorente as they attempted to get back into the game, and it exploded into life for the home side.

United had barely regained their breath when the hosts surged forward again, with Daniel James delivering a low cross to the far post for Raphinha to convert just 24 seconds later. In the build-up, the video assistant referee checked for a Forshaw foul on Fernandes, but the goal stood and sent Elland Road into raptures.

Manchester United now has 46 points, putting them four points ahead of the chasing pack, which is led by West Ham in fifth. Arsenal is four points behind United, while Spurs is seven points behind, but both north London clubs have three games in hand on Rangnick’s team.

MUST READ:  Davido Takes Interest In A Viral Tweet Of A Boy That Scored A1 Parallel In WAEC Exams But Could Not Further His Studies

United are now only four points behind Chelsea in third place, despite having played one more game than Thomas Tuchel’s side.

Meanwhile, Leeds’ point per game has dipped below one this season, and the margin between them and the relegation zone has remained at five points.

Enomaomoruyi man of the match:

Manchester United boss Ralf Rangnick said: This will give us energy

“[The win] was great for everybody in the club, for supporters, for the players, for us, we knew that we had to win, even more so after yesterday’s results. Let’s keep it going. I hope this experience today will also give us additional energy for the Champions League and upcoming games in the Premier League.”

MUST READ:  BBNaija JMK to launch her restaurant on 27th March

Leeds Utd boss Bielsa said:‘It is impossible not to be worried’

Marcelo Bielsa admitted he is increasingly worried about his side’s position after the 4-2 loss to Man Utd at home.

Asked about Leeds position on the Premier League table, Bielsa said: “It is impossible not to be worried. We have conceded 50 goals.

On the game, he added: “In the first half we started well and ended well but didn’t manage to score. In the moments we lost dominance they scored.

“After we got back level, we had the chance to go 3-2 up and straightaway they went up and scored again. We played better trying to get back into the game than when we were trying to keep a result, but something has repeated that is difficult to resolve.

“We have to defend better. We are missing Kalvin Phillips and Robin Koch was substituted and we could not count on Pascal [Struijk] in midfield because he went back into defence. Not being able to come with the three defensive midfielders we have, there is a weakness in the recovery of the ball.”

On Wednesday, Leeds United travel to Anfield to face Liverpool in the Premier League; kick-off is at 7.30 p.m.

Meanwhile, Manchester United will play Atletico Madrid in the Uefa Champions League last 16 on Wednesday (kick-off at 8 pm), followed by a Premier League match against Watford on Saturday (kick-off at 3 pm).