Reports say the mansion, situated in the Asokoro area, was crushed on Saturday at about 8 am by officials of the FCT Administration with a bulldozer which began to demolish the building. 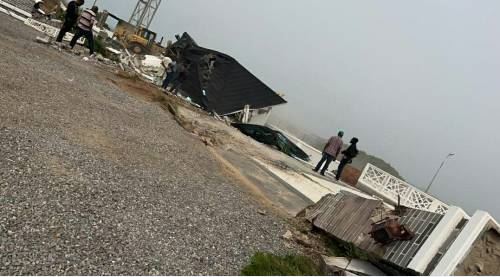 According to reports, the Asokoro mansion was crushed on Saturday around 8 a.m. by FCT Administration officials wielding a bulldozer, who began demolishing the structure.

Speaking to reporters, the building’s owner, Kpokpogri, an ex-lover of Tonto Dikeh, expressed shock, claiming that officials had not informed him of the demolition, which he described as illegal.

“I don’t have any issue with anybody that will warrant the wicked and illegal destruction of my house this morning without any pre-notice from the FCT ministry. Is it because I am from the Niger Delta region of the country? I just woke up this morning and saw the ministry officials, security men and a bulldozer and the next thing I saw was my fence being brought down.

“They entered my compound and began to demolish my house; as we talk, my swimming pool is gone, and a bungalow in my compound is also down. And any moment from now, the full mansion, which cost me over N700million, my hard-earned money, will soon be brought down and I don’t know the offence I have committed and I don’t know who is behind this.

MUST READ:  Comedian Funnybone Ties Knot With Angel:Stunning Photos and Video From The Ceremony

“None of the officials wants to speak with me and I am only being told now that the FCT minister, Muhammad Bello, sent them to come and demolish my house and that a road will be passing through my house. My house was approved, I paid for everything, I am not owing the federal government a dime. Before now, about five northerners had approached me to sell my house to them but I refused. Because my house is seated on a rock and an attraction of everybody; so everybody wants to have my house.”

As of the time of writing this report, the main building is about to be demolished as soon as Kpokpogri evacuates the building’s properties and other belongings.

Prince Joseph Kpokpogri and his ex-lover recently called each other awful names on social media.