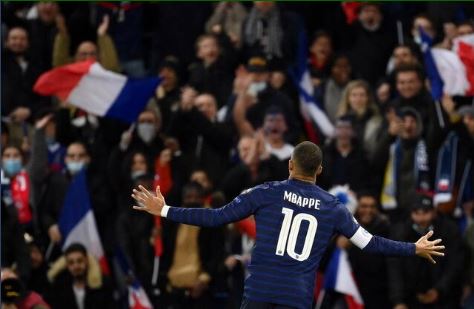 France qualified for Qatar 2022 FIFA World Cup with an 8-0 thrashing of Kazakhstan. Kylian Mbappé scored a hat-trick in the first half for his country, ensuring that they will defend their title in Qatar.

Mbappe dazzles as France qualify for Qatar 2022 the Les Bleus did in a fashionable way putting eight goals past a hapless Kazakhstan team.

The Les Bleus has struggled for goals during the qualification campaign, scoring only eight goals in their previous six games. However, they showed no evidence of that terrible record in the early stages, surging into a six-minute lead. Theo Hernández brought the ball back to Mbappé, who scored a near-post first-time finish to put the hosts ahead.

France stomped their foot on the accelerator and doubled the lead moments later, capitalising on a moment of madness from Stas Pokatilov. The shot-stopper charged out of his area to close down Kinglsey Coman but failed to win the challenge, giving the Bayern Munich man an easy ball to Mbappé for his second of the night.

The 22-year-old completed his hat-trick before HT as Coman picked him out from the right to glance his header into the far corner, putting the game to bed before the interval.

‘Les Bleus’, on the other hand, had no intention of letting the game slip away, scoring a fourth ten minutes after the resumption.

Hernández’s second assist of the night came in a similar fashion to his first, this time finding Karim Benzema at the near post to poke home. Just minutes later, the Real Madrid talisman doubled his tally with a tap-in after some clever build-up sliced through the defence.

Moussa Diaby had a goal disallowed for offside, but Adrien Rabiot blasted a header past Pokatilov in the 75th minute.

Antoine Griezmann got in on the act with a seventh goal, winning and converting a penalty to surpass Michel Platini with his 42nd goal in international colours. Mbappé rounded off the carnage with his fourth goal of the night in the late moments, securing his side’s spot in next year’s World Cup and extending Kazakhstan’s terrible road record, which now dates back to September 2009.

MUST READ:  Club Brugge held Mega Stars Psg to a 1-1 draw, Man City vs Leipzig in a Nine goal thriller