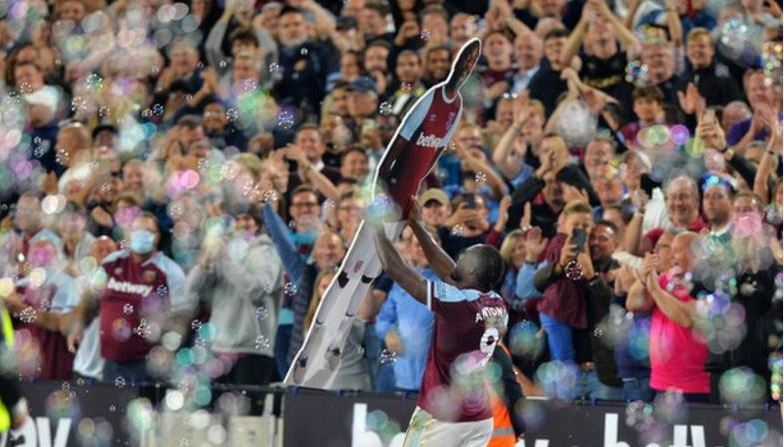 Michail Antonio hit brace against Leicester in a comprehensive 4-1 victory at the London stadium.

After Jamie Vardy’s bad pass, Pablo Fornals opened the score with a one-two with Said Benrahma. Ayoze Perez left the Spanish midfielder on the floor minutes before half-time, and Michael Oliver awarded him a straight red card after a VAR review revealed a stomp from the Foxes man on Fornals’ shin.

Michail Antonio would subsequently take centre stage late in the game, becoming the club’s all-time Premier League goalscorer. He fought off Soyuncu to score his club’s 48th league goal, breaking Paolo Di Canio’s record, and then celebrated with a cardboard cut-out of himself.

After taking one touch from Vladimir Coufal’s cross to pull the ball away from his man, he beat Kasper Schmeichel with a second to trigger more wild celebrations among West Ham’s first full home support since February 2020.

By virtue of their sweeping victory, West Ham currently leads an emerging Premier League table in terms of goals scored, while Leicester is left to nurse their wounds following a humiliating setback in the capital.

West Ham boss David Moyes on Michail Antonio’s performance: “I didn’t think he’d made the right choices with the ball in the first half a few times, but he was a different class after half-time, with his link-up play and positioning.

“His goals are typical Mich. He can score so many. I didn’t think he made the right choices in the first half but in the second half, he was different class.

“He’s only been at centre-forward for the last 18 months or two years. He’s gone on from there and he’s looking a real handful. His all-around play has improved so much.”

Leicester boss Brendan Rodgers: “I was proud of the players’ mentality and spirit. We made mistakes and got punished.

“After 65 minutes, we’re still in the game, 2-1, we then are looking to make some changes to keep fighting. We stayed in it against a good side, and then conceded the third goal which made it very difficult. Michail’s finished his two goals very well, and we lose the game 4-1.”

MAN OF THE MICHAIL ANTIONIO SPEAK…

Michail Antonio: “I thought, I’m making history, I’ve got to do something special. Did any of you get what celebration it was?

“Save the Last Dance [sic: Dirty Dancing] – the lift from the end!

“It was an amazing night. The fans enjoyed it, we enjoyed it. There’s nothing better than scoring a goal and hearing a roar from the fans.”

West Ham will host Crystal Palace in a London derby at the London stadium Kick-off at 3 pm.

Leicester faces a long trip to Norfolk to face Norwich in their next Premier League game on Saturday; Kick-off at 3 pm.

WHY THE NEW HAIR LOOK FOR JORGINHO AND THIAGO ?