Liverpool reign supreme in Merseyside derby,the Reds blew Everton away at Goodison Park in an electrifying game,this is the Toffees heaviest defeat in a home derby match in 39years.

A tribute was paid in the 12th minute to Ava-White who lost her life in an attack last week,we all say no in unison to knife attack.

Liverpool surged to a two-goal lead in the first 20 minutes, dominating the game. Within the first three minutes, both Joel Matip and Mo Salah squandered clear chances from close range, but Everton’s reprieve was short-lived.

Jordan Henderson stroked home a precise strike past Jordan Pickford in the ninth minute after an overlapping Andy Robertson dragged the ball back for him. By the time Salah doubled his team’s lead, Everton had failed to record a chance on goal, as the Egyptian ran in behind Lucas Digne and curled an effort past Jordan Pickford. 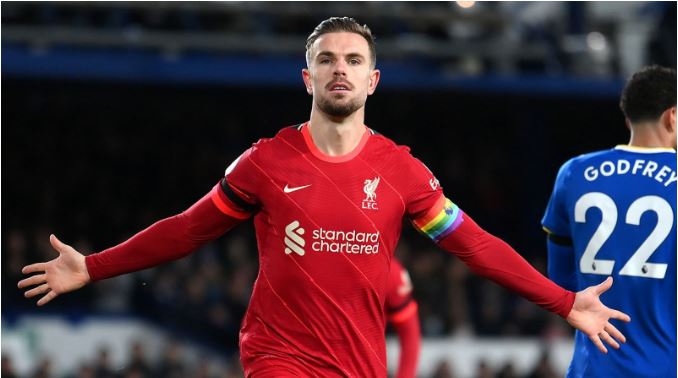 Everton were inundated but still in the game, and their first attempt on target gave them a lifeline. Demarai Gray ran in on goal and slotted the ball past Alisson after Richarlison supplied the ball through the space that had opened up between the two Liverpool centre-backs. The Goodison crowd were enthralled by an even start to the second half, as Rafa Benitez’s squad matched the intensity of his previous club for the first time in the game.

There were two incident in the game that isn’t pleasing,the dive from Andros Townsend and Demarai Gray both were correctly booked by Referee Paul Tierney.We expect players to compete fairly and squarely on the football pitch.

As the game approached the hour mark, it took on the tense air of a cross-city derby, with both teams knowing the game could be won or lost by a flash of brilliance or a blunder. Unfortunately for Seamus Coleman, the latter was the case, as the experienced Everton defender mishandled a bouncing ball, allowing Mo Salah to break in and begin a mad rush for goal. The striker has the pace and poise to slip it past Pickford and secure a crucial derby win.

The only question was whether Liverpool could inflict more misery on their city rivals, which Diogo Jota superbly answered by turning his man and firing in a fourth from an extreme angle.

The calmness of Reds to play out from the back despite the pressure from everton is admirable.The devastating counter attack from Liverpool was just too much for Everton to cope with.

Jürgen Klopp opted to make one change, with Joel Matip coming in for Ibrahima Konate in the heart of the defence.

Richarlison and Demarai Gray returned as Everton boss Rafael Benitez made two changes from the defeat at Brentford.

Everton boss Rafael Benitez reacts to the loss:he says  Everton were “made to pay for making too many mistakes” in Wednesday’s night’s defeat to Liverpool at Goodison Park – and insists the Blues must quickly eradicate such errors to climb the Premier League table.

Everton now host Arsenal on Monday Night Football at 8pm, in the Premier League, while Liverpool are at Wolves at 3pm on Saturday.