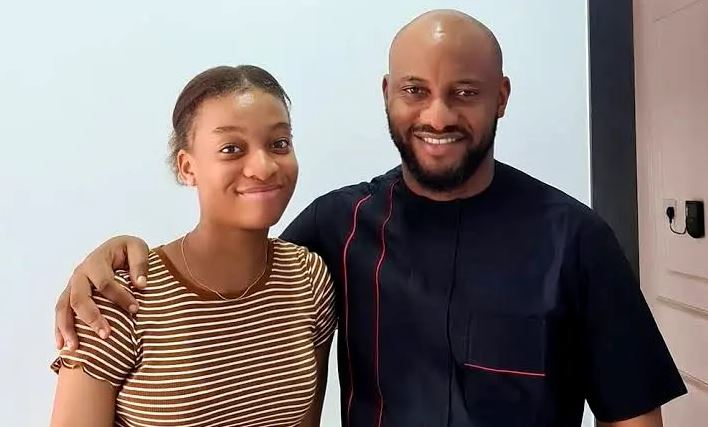 Yul and his daughter Danielle

Netizens have lampooned Nollywood actor Yul Edochie after his daughter distanced herself from him in a post on Friday.

Yul’s daughter, Danielle issued a warning to those linking him to her father’s marriage saga in an Instagram post, begging them to stop tagging her in any poster related to her father.

She denied being an actress or having any business with Nollywood, stating that no one should force a career on her.

She wrote: “Please I’m not an actress, I have no business with acting and Nollywood, No day force carer on me Abeg. I don’t act and I’m not interested in acting. Acting is for him, not me and I am a whole different person. I am on my own identity. Please stop taking me in a post related to him, Nollywood, films, and actors. I am not interested in Nollywood”

However, there have been mixed reactions from Netizens some chastised Yul Edochie’s daughter for referring to her father as ‘Him,’ with many claiming she is still upset about her new marriage to Judy Austin while others condemned Yul for dragging his kids to social media on the polygamy saga.

See comments from Netizens below

myselfdefense_ng wrote: “This man has made himself an object of caricature and even his kids don’t want to associate with him anymore”

MUST READ:  "If Your Wife Is Mensurating And You Are Aroused Don't Hesitate Make Love To Her"-Prophetess Rose Kelvin Urge Married Men

kinky_vee wrote: “Yul Edochie just used his own hands to spoil the beautiful family God have to him”

__ummii wrote: “When you break a mothers heart, you automatically break the daughter(s) heart too”

rare_melekun wrote: “If she was proud of her father, she definitely won’t say this…that’s what “Him” gets for being irresponsible.”

hardewunmii__ wrote: “Not his daughter referring her father to “him”

nadine_faida_ndongo wrote:  “After all that you passing her mother go through. Am glad that she is standing by her mom, smart girl. Hope she forgives you some day”

MUST READ:  BBNaija season 7:How viewers voted Eloswag,Chomzy and Doyin for eviction

CHERISH.972 wrote:Yul who send you message.. The way wey you take dey restless, trying to prove a point it alarming.. May God see you through, na you use ur hand  wan scatter ur labor… We know all is not well at home… Take a break from social media

elfridaekere wrote: U are lifting your own daughter from outside when u are supposed to be there for her all the way , u are a shame to fatherhood. I rather remain fatherless than have a senseless father who abandoned his family for another woman