Dean Smith’s team has been relegated from the Premier League(PL) after suffering a 2-0 loss to Aston Villa at Villa Park.

Norwich was relegated from the Premier League after suffering a 2-0 defeat to Aston Villa while Burnley’s 2-1 victory over Watford was not in their favour. 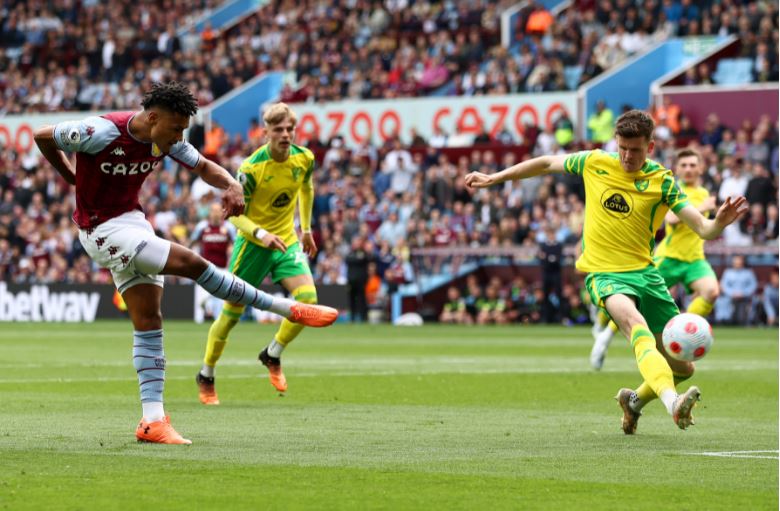 The Canaries needed to avoid defeat against Aston Villa or rely on Burnley not winning at Vicarage Road – but the permutation played out in the final 10 minutes as Burnley overcame a one-goal deficit to win 2-1.

To their credit, Norwich frustrated their opponents in the first half but lacked the quality to force a result. Villa dominated the game, with Watkins flicking a corner over the bar and Matty Cash failing to direct Lucas Digne’s cross past Tim Krul.

Minutes before Villa took the lead, Emiliano Martnez plucked a long-range shot from Milot Rashica out of the top corner. Ings had only been on the field for a few seconds when his cross-field pass found Watkins, who scored in the 41st minute. Until the arrival of Ings, Norwich appeared to be the most likely to take the lead, but instead became the first Premier League club to concede 70 goals or more in three consecutive seasons.

Norwich is now winless in their last nine Premier League visits to Villa Park, but Brandon Williams could have changed that if he had been able to force an equalizer from close range after Grant Hanley’s knockdown. After the break, Ings should have doubled Villa’s lead, but Krul saved him from close range before his header clipped the post. Ings continued to cause problems, eventually relegating Norwich to the Championship, before turning to strike home Villa’s second goal of the game with ease.

Following Burnley’s comeback win at Watford, Norwich’s 23rd defeat of the season confirmed their relegation. Despite Villa’s victory, which ensured their top-flight survival, the performance raised similar concerns for Steven Gerrard, whose side played with one eye on their vacation. None more so than Philippe Coutinho, who, after contributing seven goals in his first eight games for the club, has failed to score or assist in his last six Premier League games.

“I’m disappointed because it wasn’t a performance we should have got relegated on. I thought it was a good performance. We quietened the crowd.

“They probably scored against the run of play – a ball over the top and a slip: Brandon slips and Ollie scores. Unfortunately, that’s cost us an awful lot of games this season – little individual mistakes.

“I felt we should have had a penalty just after that and didn’t get one, but I don’t suppose I’ll get a phone call from Mike Riley.

“The Premier League is tough. I was at Aston Villa a couple of years ago and we got promoted and we spent £125m to try and stay in the league. The key to it, for me, is when you play against the teams in and around you, that you feel you are going to be competing with.

“In the big games, against [teams like] Liverpool, Man City and Chelsea, you try and scrap to get something out of those games where you can. We all know there is a gulf in quality between the top three and the rest of the league. Ultimately, we’ve come up short.

“We’ve got a great base to go with, good foundations. It’s a well-run football club. The last two times we’ve been in the Championship, we’ve won it. That’s what we have to aspire to again now. ”

“I wouldn’t say [it was a ‘total’ team performance]. We’re very happy with the three points and, obviously, the win and clean sheet but I’ve seen us play better.

“I thought we were patchy today, we started the first 20 minutes on the front foot, we were progressive and created chances. Credit to Norwich, they got some fantastic blocks in and a few good saves.

“I also thought we started the second half in the same vein, but when that second goal doesn’t come, you’ll have some nerves set in then, some edgy moments, and that’s what I’ve seen today so I think we can play a lot better.

“We knew coming into this job it wouldn’t always be rosy. We would have some tough times and some bumps along the way. There’s a lot to work on, but that’s exciting as well. We move on to next week against Burnley in a better place, with more confidence. Four points out of six from two tough games.

MUST READ:  Hiring Of "Unknown Bishops" Is The Beginning Of APC Failure-Pastor Giwa Lashed Out

“I want to give players opportunities. You train every day with these boys and if someone is outshining they certainly deserve to play. The fans need to see them. We want to prove there’s a pathway for our academy players.

“Tim (Iroegbunam) has deserved his couple of opportunities, we think the world of him. There’s still a lot of development and evolving to come but you can see his profile, and how aggressive he is. Out of possession he’s really good, he helped the team a lot today and he’ll grow and take confidence from that performance.

“Norwich showed there is a lot of fight. They made it really difficult for us, they fought to the end. They have a good manager, he left a lot of good work behind here.

“So we wish them well. But today was about us, as soon as that whistle went sentiment and emotion were out the window. The three points needed to be just as important for us as it was for them.”

Norwich will be at home against West ham in the Premier League next weekend. The Canaries then have travels to Wolves and Leicester before their final match of the campaign at home to Tottenham.