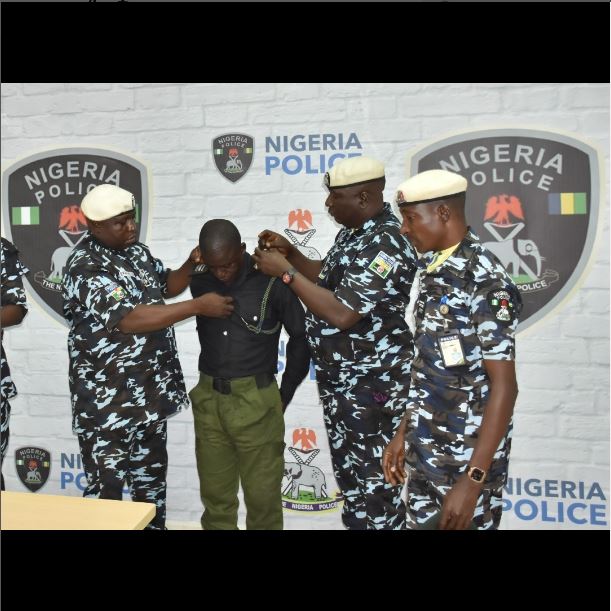 In the video, corrupt Gele said he has the backing of his former commander to extort money from the public on the highway.

Boastful Gele stated he does not collect change and does not hide his action. The IG is aware, he said.

Gele words in pidgin English in the viral video read:”My former commander say if you wan collect money, collect di one wey be say I go fit give am small if di case burst, no be di one wey only me go chop. He say collect beta money, im go follow me chop am and go defend me. So no be all dis change wey you dey give me. I no dey collect change. How much you wan give me, tok am? Na my customer be dis, na my market be dis, na here I dey sell.”

MUST READ:  Five gunmen killed by Police in Anambra

Until his dismissal, Gele was attached to Police Mobile Force 77 Squadron, Okene, Kogi State and was sent to Itobe – Anyigba Road, for the safety of road users and motorists.

Police spokesperson, Olumuyiwa Adejobi said the corrupt inspector with AP/No.188547  has been de-kitted and handed over to the Kogi Commissioner of Police for further necessary actions.

A police statement read: “His dismissal came after subjection to internal disciplinary mechanism and being found wanting of the charges levelled against him in line with extant laws governing the conduct of police personnel.

“He, therefore, ceases to be a member of the Nigeria Police Force with immediate effect.

“The officer has been de-kitted and handed over to the Commissioner of Police, Kogi State, for further necessary action.

“IGP Alkali Baba while expressing the staunch commitment of his administration at bequeathing policing standards in tandem with international best practices to the nation, warned all personnel to eschew extortion, unprofessionalism, official corruption and other inappropriate acts.

“The IGP urged them to display exemplary courage and patriotism in the discharge of their duties.”

Related Topics:featurednigeria police
Up Next