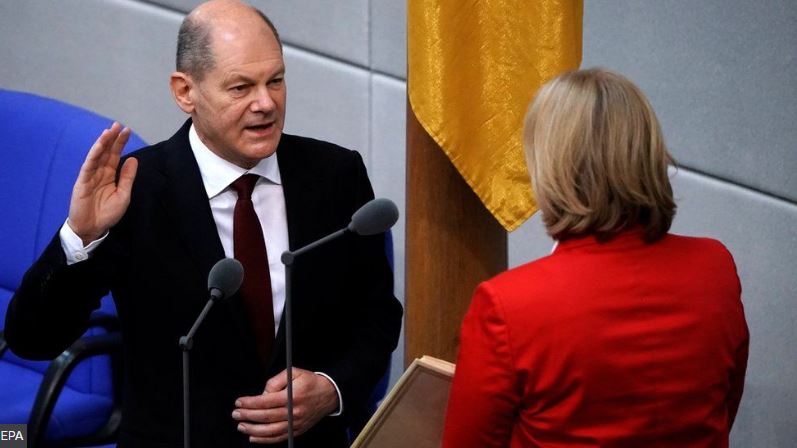 Angela Merkel’s historic 16-year presidency has come to an end with the inauguration of Olaf Scholz as Germany’s new chancellor.

He received a standing ovation after being voted in by the German parliament, where his three-party coalition has a large majority.

His Social Democrats, a centre-left party, will form a coalition government with the Greens and the pro-business Free Democrats.

Mrs Merkel’s 31-year political career comes to an end with the transfer of power.

Mr Scholz, a soft-spoken 63-year-old, led the Social Democrats to victory in the September election, pitching himself as the continuity candidate after serving as vice-chancellor in Merkel’s ministry.

President Frank-Walter Steinmeier formally appointed him as the ninth federal chancellor after the German parliament, the Bundestag, voted 395 to 303 in favour of his appointment.

He answered “yes” when asked by Bundestag President Bärbel Bas whether he accepted the position after the voting in parliament.

He returned to parliament later to take his oath of office. He omitted the religious allusion “so help me God,” unlike his predecessor.

Mr Scholz’s party has been working on a coalition pact with the Greens and the Free Democrats since the election, which was eventually inked on Tuesday. On Wednesday, all 16 ministers took the oath of office, making Germany’s first government have as many women as males.

The new government has ambitious plans to combat climate change by phasing out coal and focusing on renewable energy as soon as possible, but the coronavirus outbreak will take precedence.

In the last 24 hours, health officials have documented 69,601 new illnesses and 527 deaths, the largest number since last winter.

In Berlin and Brussels, Mr Scholz is already a well-known and respected figure. Despite coming from a different political party, he pitched himself to people as a type of Merkel Mark Two.

But it’s not all about continuity, and this rich and strong nation’s friends and trading partners will be watching intently.

Mr Olaf Scholz’s coalition administration is a once-in-a-lifetime match made in heaven. They argue that they are united by a desire to modernize Germany while preserving the country’s cherished stability.

Urgent challenges before Olaf  Scholz and his cabinet are…

However, relations with Washington may improve as a result, and Olaf Scholz’s fledgling alliance has stated that this is a top goal.

On Friday, Mr Scholz will travel to Paris and Brussels for the first time as chancellor. He and Greens co-leader Annalena Baerbock, who will become foreign minister, will have to respond to concerns over Russia’s military build-up near Ukraine’s border.

Despite Russia’s denials of invasion intentions, Angela Merkel decided late Tuesday with US President Joe Biden and the leaders of the United Kingdom, France, and Italy to create a coordinated policy to retaliate by imposing “substantial and severe harm on the Russian economy.”

Threatening Russia’s Nord Stream 2 gas pipeline to Germany, which has been finished but is now awaiting clearance from Germany’s energy authority, is one apparent economic action.

Officials from the United States say they have achieved an agreement with Germany to shut down the pipeline, which would be a substantial intervention.

Russian President Vladimir Putin congratulated Mr Olaf Scholz, saying he looked forward to constructive talks and hoped Germany would continue to recognize “there is no alternative to conversation.”

Angela Merkel was first elected in December 1990 and was immediately appointed to a ministerial position by then-Chancellor Helmut Kohl. 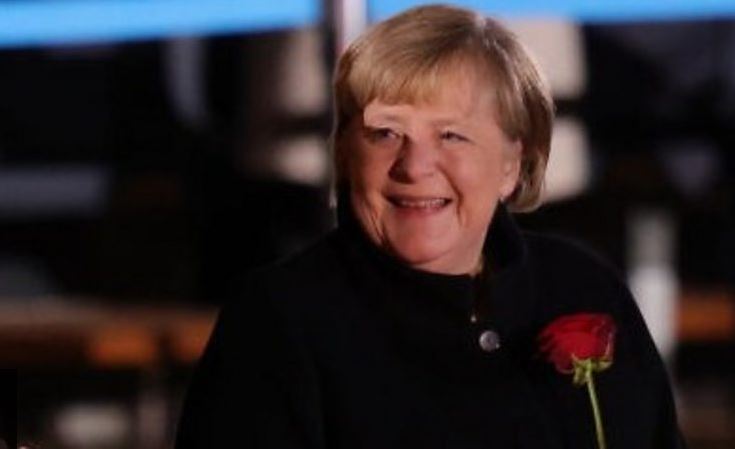 But, after helping to depose him, she became Christian Democrat leader in 2000, and then chancellor in November 2005.

She will continue to work in a flat near the Bundestag that was formerly home to Margot Honecker, communist East Germany’s most prominent woman.