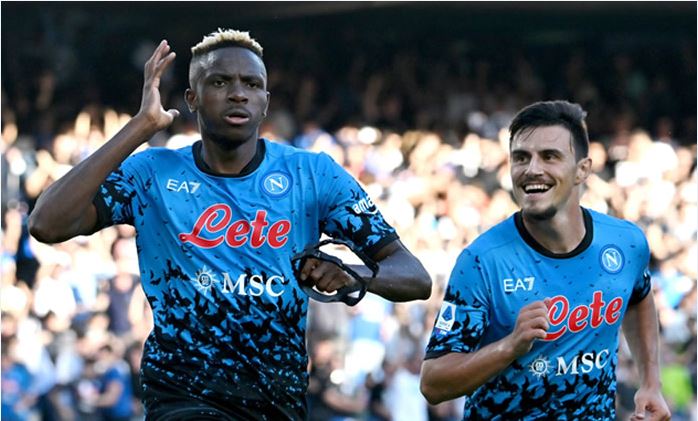 Victor Osimhen’s fine form continues since returning from injury scoring a hat trick in Napoli’s 4-1 win over Sassuolo which takes his team to the top of Serie A table and a healthy six points clear above Milan in second place.

Osimhen scored twice in the opening 19 minutes in Naples and added his third goal with 13 minutes left to ensure Napoli increased both their winning run and their lead over the champions AC Milan, who play Torino on Sunday.

The 23-year-old has returned to the team after missing more than a month due to a thigh injury, scoring six goals in his past four Serie A and Uefa Champions League games.

After his slick performance on Saturday, he now has seven goals in eight league games this season, tying Marko Arnautovic of Bologna for the most goals scored.

On the day Napoli commemorated late club hero Diego Maradona’s 62nd birthday, which would have been Sunday, Khvicha Kvaratskhelia, this year’s discovery, assisted on his first two goals and scored the third.

MUST READ:  Ademola Adeleke sworn in as sixth Osun Governor

Since joining Napoli in the summer, Georgian winger Kvaratskhelia has scored eight goals and assisted on eight more. He plays with a passion and freedom that hasn’t been seen since Maradona left Italy in disgrace in the early 1990s.

The team of Luciano Spalletti is still unbeaten and has scored 50 goals in all competitions. They are beginning to resemble the real deal and could end Naples’ 32-year wait for the league championship.

enomaomoruyi.com is a media and news website that is accessible for all to get information that don’t cost a dime. It does take time and effort to gather information and then write. If you find it useful and would like to show your support for it you can send us a token of your appreciation below.