Nollywood superstars, Peggy Ovire and Federick Leonard a.k.a the Film Lord had their traditional wedding ceremony today, the 19th of November in Warri, Delta state.

Warri was agog as  Nollywood A-list actors and actresses storm the wedding ceremony of Peggy and Federick. 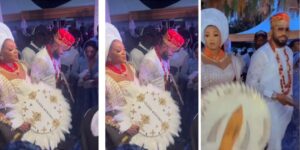 Videos from the colorful wedding ceremony have been shared by Nollywood celebrities on social media platforms.

MUST READ:  Phyna receive a grand reception at Benin (video)

In one of the videos, the bride and the groom were seen dancing elegantly into the dance floor arena with both holding white-color feathers bridal hand-fan. On the groom’s hand fan the ‘Film Lord’ was printed on it, Freddie likes to be called the Film Lord.

Prayer was offered by the parents upon the couple.

The high points of the ceremony were; the payment of the bride’s price and the presentation of the bride to the groom.

Related Topics:naija celebrities news
Up Next