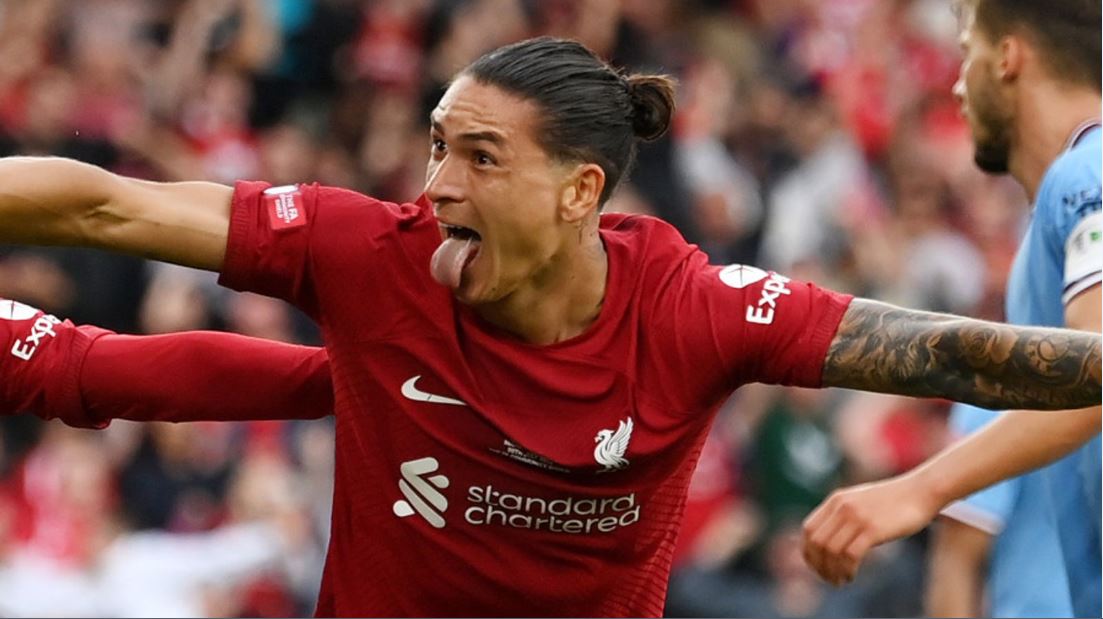 Super sub Nunez inspired Liverpool to make a bold statement ahead of the new premier league [PL] season as they beat Manchester City 3-1 to win the Community Shield at the King Power Stadium.

The FA Cup winner lost the premier league title by a single point last season after a season-long fight with Manchester City but they triumph 3-1 at the King Power stadium in the community shield.

Leading up to the game more of the conversation was focused on Manchester City’s new striker Erling Haaland, who was given the opportunity to impress from the start, but it was Nunez’s late cameo from the bench – including a stoppage-time goal – that swung the game in Liverpool’s favour and took all the credit.

4 – Darwin Núñez is the fourth player to score on his debut for Liverpool under Jürgen Klopp, after Sadio Mané, Mo Salah and Virgil van Dijk. Fantastic. pic.twitter.com/xyHQcc8lIk

Haaland struggled to make an impact as Liverpool dominated the early stages, and their early dominance was rewarded when Trent Alexander-long-range Arnold’s strike took a flick off Nathan Ake’s head before beating Ederson’s dive and finding the far corner.

After the break, City clawed their way back into the game when substitute Julian Alvarez bundled the ball home from close range, with the goal eventually awarded after VAR overturned an initial offside call.

When Liverpool’s new striker was finally introduced from the bench, it was his goalbound header that was blocked by Ruben Dias’ arm, and referee Craig Pawson pointed to the spot after a VAR review.

It gave Mohamed Salah the chance to put the Reds ahead, and he made no mistake, firing the ball past Ederson before Nunez capped a fantastic day for Klopp’s men, heading home from close range as last season’s FA Cup winners secured the season’s first silverware.

Liverpool came close to a quadruple last season, winning the Carabao Cup and FA Cup, but they missed out on the league by the tiniest of margins and were defeated by Real Madrid in the Champions League final.

Only 63 days after that defeat in Paris, the Reds were back in action against the team with whom they have developed an intense but respectful rivalry over the past four years.

Liverpool came out flying from the start, hassling and harrying the City defence, and Salah – fresh from signing a lucrative new contract in the summer – struck the side-netting in the third minute.

Before fellow full-back, Alexander-Arnold broke the deadlock with a curling effort, albeit via a nick off Ake’s head, Andrew Robertson headed into the side-netting as well.

It sparked joyous scenes in the stadium’s red section, where Liverpool fans lit flares and filled the stadium with smoke, just as they had done at Wembley after their FA Cup victory over Chelsea in May.

Nunez was signed from Benfica to replace Sadio Mane, who has joined Bayern Munich, and he came on just before the hour mark.

He nearly had the perfect start to his Liverpool career when he latched onto Jordan Henderson’s perfectly weighted through ball, only to fire straight at the advancing Ederson.

But he was involved in Salah’s goal as well, as his header struck Dias’ arm inside the box, resulting in a penalty for the Egyptian.

Nunez had time to return home late in the game as the £64m man completed the domestic trophy set for manager Klopp.

Liverpool host Strasbourg in their final pre-season friendly on Sunday before hosting Fulham in their first Premier League game of the season on Saturday, August 6.

Manchester City will now focus on defending their Premier League title against West Ham on Sunday, August 7, at 4.30 pm.