Toyosi with a Twitter account @_misteriouss had earlier on Thursday morning reported that she was being kidnapped and raped at 78 Obayan Street, Pako, Akoka, Lagos, and that she desperately needed help.

A Lady named Toyosi has been apprehended by the Police in Lagos after she faked being kidnap and raped just to gain undeserved fame on social media. 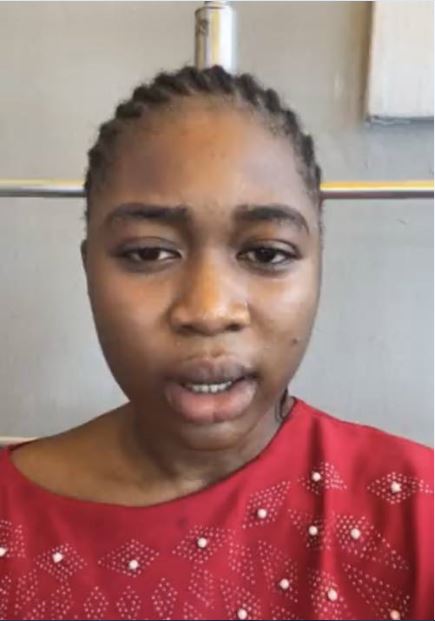 The lady with the Twitter account @_misteriouss had earlier on Thursday morning cried out that she was being kidnapped and raped at number 78 Obayan Street, Pako, Akoka, Lagos, and needed help desperately.

Soon after, she left a mobile phone number allegedly belonging to her attacker for people to call and trace in case worse things happened to her.

However, after social media users alerted police and bombarded the number with calls in an attempt to rescue Toyosi, she tweeted that she was fine and that people should stop threatening or calling the number.
Despite the young lady’s tweet, Nigerians, concerned that she may have made the post under duress, continued to call the line and police to ensure she was not further harmed.

Within a few minutes, three police vans arrived at the address Toyosi had given in her distress tweet to rescue her.
However, in an unexpected turn of events, the young lady posted another tweet, saying,

“I posted earlier that I was kidnapped and raped. It’s false. I’m so sorry for this. Please stop calling and threatening the numbers.”

Infuriated by her admission of deceiving members of the public, social media users demanded that the police arrest and prosecute the young lady as a deterrent to others who might try the same thing in the future.
In response to the incident, a Twitter user with the handle @GoziconC stated,

“The police must do their job. First, they will make sure you are really fine and this video was not done under duress.

“Secondly, if you actually made this video for clout, you will explain that in a cell.”
Another tweep, @Oluwatayofem, in his reaction said, “There is no length some sorosokes(talk aloud) won’t go for chasing clout but either way, someone must face the consequences of such actions.”

In his own reaction, another user of the micro-blogging platform, Abdulazeez Asekome, said, “If she was forced to make the video, she should come out and tell the police, they’ll do something about it.
“The more she hides, the more people continue to think this is really true.”

Toyosi was later arrested and taken to Bariga Police Station ahead of her arraignment in a special offences court for disturbing public peace after responding to angry Nigerians’ calls.
The issue was the top trending topic on Nigerian Twitter as of midday on Thursday.

UNICEF:Over 11500 Schools Shut In Nigeria Since 2020 Because Of Insecurity