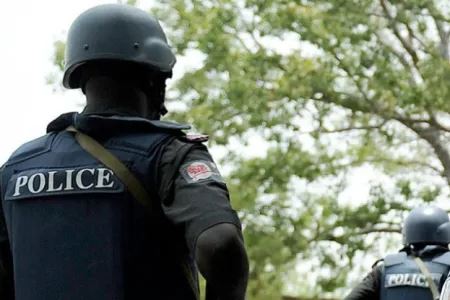 Anambra State police reportedly arrested two suspected cultists who were involved in the killing of a rival cultist, beheading him, and playing soccer with his head last year.

Another segment of the video showed the young men making fun of the beheaded rival cultist’s dreadlocks while playing soccer with his head.

According to sources, the incident occurred in Igbariam, Anambra East Local Government Area, the same community that houses the State-owned university, Chukwuemeka Odumegwu Ojukwu University (COOU), and the head was taken to Awka, the state capital, where it was used for play.

In a viral video, two young cultists, Chisom Okafor and Ikechukwu Chinweze, aged 23 and 19, who were being questioned by men they suspected to be police officers, admitted to being members of the Ayes cult and participating in several killings.

Chisom Okafor, 23, was seen in the video confessing, “I’m also known as Stamina.” My mother is from Awka, but I was born in Igboukwu. My age is 23 years. I’m a member of the Ayes cult and have only killed three people before.”

MUST READ:  My Healing Began When I Stopped Having Sex With My Husband-Kaffy Recounts Troubles Of Her Failed Marriage

“I was among the cultists who went to Obj’s place (just a nickname) and killed some security men,” he continued in his confession. We were seven people who went through the operation. I dropped out of school, but I’m a tiler and I’m very good at it.”

Okafor also mentioned in the video the names of the seven members of their cult who took part in the operation against security guards.

“I’m Ikechukwu Chinweze, I’m 19 years old, from Umuzocha in Awka,” said another cultist interviewed in the video. I’m a high school dropout who was learning phone repair before meeting Chisom here in Ifite.”

Meanwhile, some Anambra State residents claim that the man killed last year, Savage, was the same person whose head was used to play soccer, implying that the now-arrested cultists were responsible for the act.

Iyke Orji, an Anambra indigene said: “Some group of boys have been caught and at state CID Awka now.

“They confessed that they’re the boys that were playing ball with human skull some time ago that went viral on social media,

“They confessed that they were the boys that attacked and killed security men at Miracle Junction Awka.

“They confessed that they killed someone (Savage) at Oko, took the body from Oko to Awka and decapitated the body at Amaenyi Awka.