During his visit to Ebonyi State, the President is expected to launch King David University of Medical Sciences, Ebonyi international shopping mall, along with some roads, among other projects

President Muhammadu Buhari arrived in Ebonyi State on Thursday, he is on a two-day official visit to the southeast state.

The President arrived in Ebonyi at about 11 am in a helicopter. 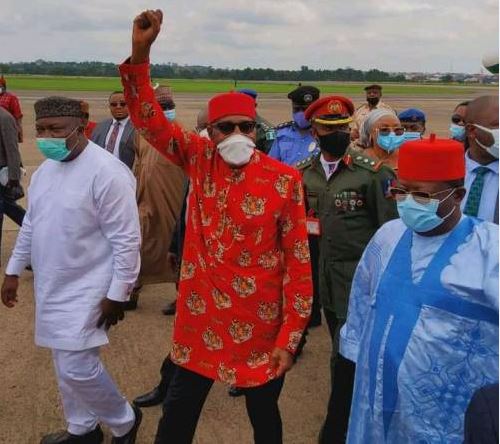 Buhari in company with Dave Umahi and other government officials

Among other projects, the president will launch the King David University of Medical Sciences, the Ebonyi International Shopping Mall, and some roads.

Prior to Buhari’s visit, security personnel had been deployed to Abakaliki, the state capital.

Embattled Governor of Ebonyi, Dave Umahi said in a statement on Tuesday that President Buhari would be in the state for two days: Thursday and Friday.

The announcement was followed by threats from unidentified gunmen who declared a mandatory sit-in protest on May 5 and 6 in Ebonyi and other South-West states.

MUST READ:  My Daughters have amazing brothers to love-Annie Idibia

According to a military source, the gunmen who took control of several towns in Abia, Imo, and Anambra states on Wednesday evening threatened to attack anyone who disobeyed the order.

“Gunmen were seen shooting in some streets of Aba, Abia, Imo, and Anambra, announcing to residents that there will be a sit-in on Thursday and Friday when President Buhari visits Ebonyi State and that they must observe it throughout the South-East,” a source said.

However, according to a report by NAN on Thursday, among the security personnel on duty were soldiers, police officers, and Nigeria Security and Civil Defence Corps personnel.

Some Abakaliki residents who spoke with NAN said they were looking forward to the president’s visit.