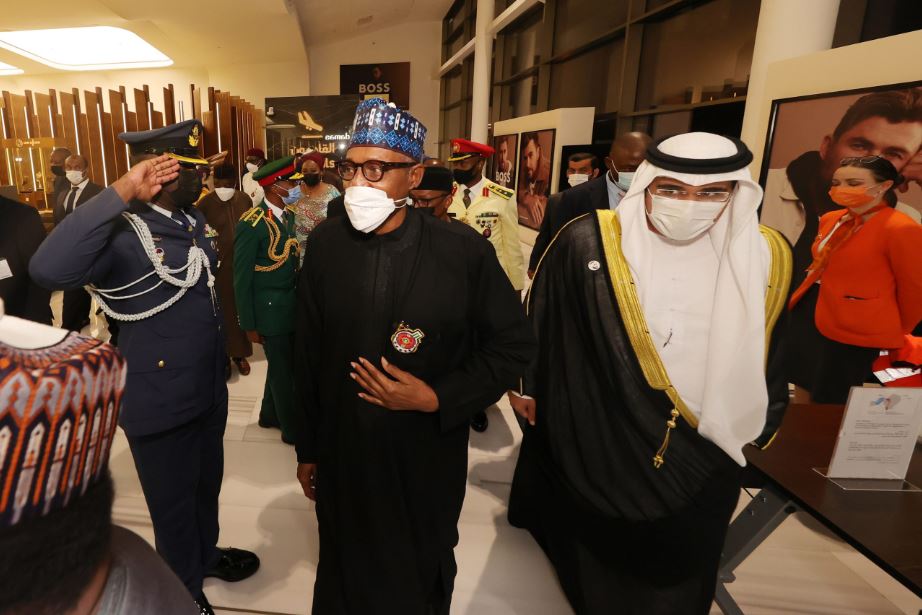 President Buhari attends Dubai Expo in the United Arab Emirates, he was accompanied by Ministers. He left the Federal Capital Abuja on Wednesday to attend the event.

The special adviser to the President on Media and Publicity Mr Femi Adesina made this known to the media on Wednesday in Abuja.

EXPO 2020 Dubai, with the theme “Connecting Minds, Creating the Future,” presents the setting for Nigeria to join over 190 countries in forging authentic and meaningful connections “to build a better future for everyone,” according to Femi Adesina.

He said the Expo will give the Nigerian delegation another chance to highlight considerable economic progress made in the last six years as a foundation for making the country a desirable destination for foreign direct investment.

Aside from a tour of the Nigerian Pavilion at the Expo on Friday, Nigeria’s National Day at the show, the president will meet with potential investors in the audience.

Sheikh Mohamed bin Zayed Al Nahyan, Crown Prince of Abu Dhabi and Deputy Supreme Commander of the UAE Armed Forces, and Sheikh Mohammed bin Rashid Al Maktoum, Vice President and Prime Minister of the UAE and Ruler of the Emirate of Dubai, will also meet with the Nigerian leader, according to Femi Adesina.

“On Saturday, President Buhari is an important invitee at the special Trade and Investment Forum themed: Unveiling Investment Opportunities in Nigeria.“

“It was organised by the Ministry of Industry, Trade and Investment to recognize Nigeria’s attendance at the event,” he added.

Other ministers that are in the President crew, according to Femi Adesina, include Sen. Hadi Sirika, Minister of Aviation, and Dr Mohammad Abubakar, Minister of Agriculture and Rural Development.

President Buhari will be expected to return to the Federal Capital Abuja on December 5, 2021.