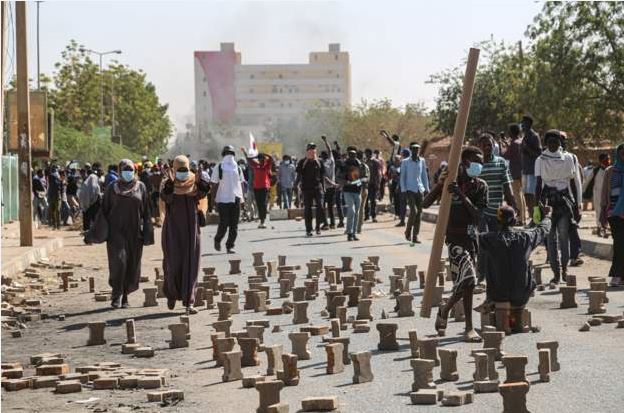 Protesters in Sudan has blocked access road leading to Egypt for the ninth day.

The Sudanese resistance committees in the north have now closed the highway connecting Sudan and Egypt for the ninth day.

Sudanese protesters in the northern state have set multiple roadblocks along the route that connects the two nations, obstructing the flow of Egyptian-owned cars carrying Sudanese livestock or goods back to Egypt.

Protesters, largely farmers, initially shut down the road after the government hiked the cost of power, forcing the administration to reverse course.

The demonstration evolved into a broader repudiation of the coup and hostility to the military and its regional allies, including Egypt.

Long columns of Egyptian trucks are seen stopped on the desert route between Khartoum and Ergeen, near the Sudanese border, in videos shared on social media.

An Egyptian trucker’s video, shot near the border crossing, has sparked uproar on Sudanese social media.

The man displayed 18 vehicles filled with cattle that had been stranded on the Sudanese side of the border by “mercenaries.”

Another video shows a huge line of Egyptian trucks parked in a parking lot.

Many pro-democracy activists in the state oppose the export of live cattle and other Sudanese agricultural products, which they believe helps the military and its businesses.