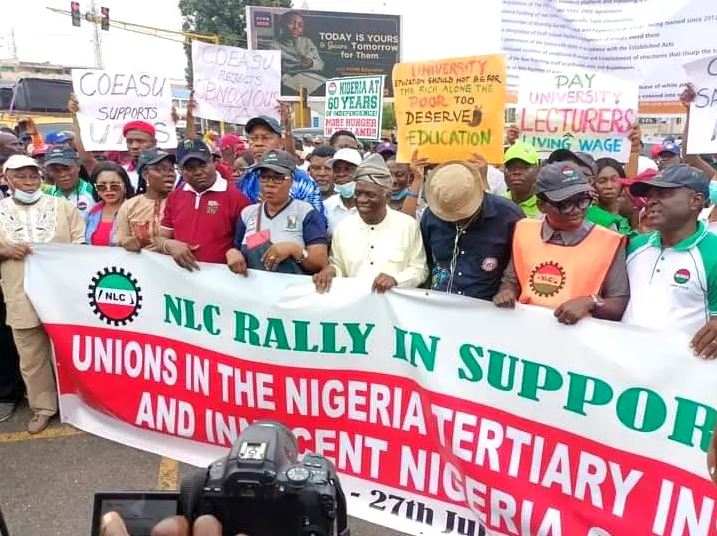 NLC protests in solidarity with ASUU

The Nigeria Labour Congress, NLC, launched a two-day nationwide protest yesterday against the Federal Government’s failure to resolve the strike by unions in the nation’s university system, warning the government not to play with another people’s uprising similar to the 2020 #EndSARS protest. So far, the strike has lasted five months.

As a result, the NLC issued an ultimatum to the government to resolve the issues within the two-week time frame President Muhammadu Buhari gave Education Minister Malam Adamu Adamu to do so.

Mrs Funmi Agnes Sessy, the chairperson of the Lagos State chapter of the union, issued the warning yesterday during a solidarity rally in support of the Academic Staff Union of Universities, ASUU, and other unions in the university system.

“As parents and critical stakeholders in the sector, we are tired of seeing our children and students idling away at home for over five months now. Education is a vital sector that must not be toyed with and handled with levity. It is unfortunate that our leaders who benefited from free, quality education in their days are now the ones killing the sector.

“The ladder they used in climbing to the top, they have removed and thrown away. President Buhari used to be part of protests like this when he was an opposition leader; we are disappointed that a lot of things they promised us are not done. The naira is on a free fall, the standard of living is on the decline and we won’t just sit idly by and allow the future of our children and wards destroyed.

“We are calling on the government to quickly resolve the ongoing strike in our tertiary institutions. Colleges of education, polytechnics and universities have been shut for months; in which sane clime do they allow that to happen? After this protest, if nothing is done within the time frame given to the minister by the President, then the nation is going to witness a people’s uprising bigger than what we all saw during the #EndSARS protest. Enough of our children being turned into criminal elements,” she said.

Speaking at the rally, which began at Under Bridge in Ikeja and ended in Alausa, a Senior Advocate of Nigeria, Mr Femi Falana, expressed disappointment that those in authority now, whom he described as his generation, appeared to be intent on destroying the country’s education sector.

He recalled how, in the past, students in tertiary institutions were fed on 50 kobo per day, with high-quality meals.

Falana, who urged Nigerians not to believe the government’s claim of a lack of funds, said: “It is not true that the government has no money to fund education and other critical sectors. At the beginning of the year, the government said it would spend N443 billion on fuel subsidies, but now it has increased to N6.5 trillion.

He urged the President to stop travelling around the world and arrest criminal elements who have milked the country dry and recover public funds in their possession.

“I commend the Nigeria Labour Congress for bringing out all workers today (yesterday) to protest against the insensitivity of our junketing president. As we are here now, he is on his way to Liberia to deliver a speech.

“The President is tired, he has said he is eager to go back to Katsina. We are asking him to rush back home,” he said.

Dr Adelaja Odukoya, the Lagos Zonal Chairman of ASUU, addressed the crowd, lamenting that Nigerian lecturers are the lowest paid in the world, as well as the deterioration of education in Nigeria as a result of the incessant strike.

“A professor in Nigeria earns N460,000 monthly after-tax; that is bad and shameful. We cannot continue like this. Our universities are no longer attractive and competitive. We are tired of being at home and strike is the last option for us.

“We have an irresponsible and uncaring government. A government that cares about its people must invest in education, especially university education. This protest is for the struggle for the soul of this country,” he said.

At Lagos Government House, Governor Babajide Sanwo-Olu praised the protesters for remaining peaceful during the protest.

Sanwo-Olu, who was represented by Mrs Ajibola Ponle, Commissioner for Establishment, Training, and Pensions, assured the protesters that he would convey their message to the President for appropriate action.

“Mr Governor is unavoidably absent due to urgent state matters. He conveyed his best wishes to you all and thanks you for this peaceful protest,” Ponle said.

In Ogun State, NLC threatened to shut down the economy if…

If the federal government fails to resolve all issues surrounding the ongoing strike by unions in the nation’s public universities, the Ogun State Council of the Nigeria Labour Congress, NLC, has promised to join the national leadership of the union in shutting down the country.

Members of the NLC in the state had gathered at the state secretariat as early as 7 a.m. to carry out the protest, which was taking place simultaneously across the federation’s states.

The protest began at the NLC Secretariat on MKO Abiola Way in Abeokuta, the state capital, and ended at the Governor’s Office in Oke-Mosan, where they presented a letter to the State Governor, Prince Dapo Abiodun, who was represented by the Secretary to the State Government, Tokunbo Talabi.

In Oyo state, Ibadan grounded by NLC in solidarity with ASUU

Major streets in Ibadan, Oyo State, were closed down yesterday as workers demonstrated in solidarity with ASUU over its prolonged strike over what it described as the Federal Government’s nonchalant attitude.

Workers marched through Agodi Road, where Government House is located, and adjoining roads to express their displeasure with the government’s failure to address the university unions’ demands.

The labor leaders also vowed to continue making the necessary efforts to ensure that the Federal Government acceded to ASUU’s demands for the benefit of the nation’s tertiary institutions.

Addressing the workers after the peaceful protest at the Governor’s Office, Secretariat, Ibadan, Governor Seyi Makinde, who was represented by his deputy, Bayo Lawal, said the labour union’s demands would be investigated and appropriately advised the Federal Government.

Earlier, Com. Kayode Martins, the state chairman of the NLC, stated: “The strike, as you already know, is over the non-observance by government of the agreements it voluntarily entered into with the unions. It has also been about imposition of IPPIS on the university unions to which they have taken objection with credible reasons.”