Paris Saint-Germain 1-0 Real Madrid: At the death, Neymar’s clever back-heel releases Kylian Mbappe down the left flank, and the France international fast feet see him slip past two players before side-footing in through Courtois’ legs. 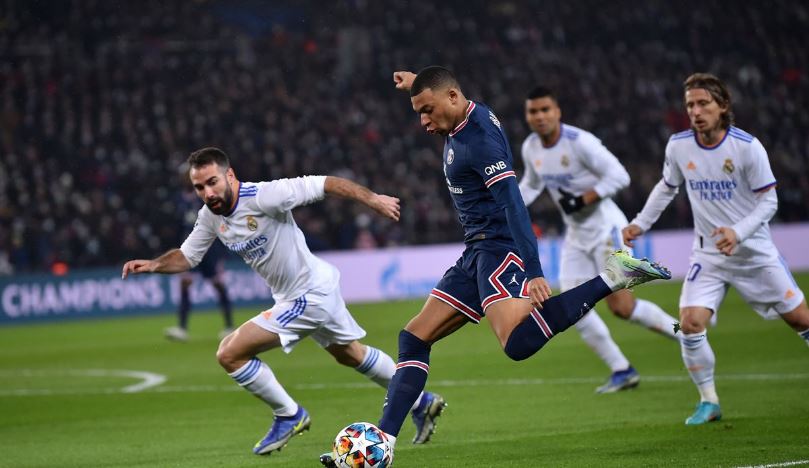 Paris Saint-Germain defeated Real Madrid in the UEFA Champions League last 16 with a sensational 94th-minute winner by Kylian Mbappe. The contest appeared to be heading for a goalless draw after Lionel Messi’s earlier penalty miss, but a moment of brilliance gave ‘Les Parisiens’ the lead heading into the second leg and a slender advantage.

PSG 1-0 Real Madrid: It looked to be heading for a frustrating goalless draw in the French capital after Lionel Messi had seen his 62nd-minute penalty saved by Thibaut Courtois.

Kylian Mbappe launched the initial onslaught, tormenting Dani Carvajal before squaring to Angel Di Maria, who rocketed his effort over the bar. Mbappé, who has been linked with a summer move to ‘Los Blancos,’ was showing his suitors what they could be getting when he found himself behind again, only to be denied by Thibaut Courtois after a tame shot.

MUST READ:  "Happy birthday to the woman that brings sunshine to my life"-Comedian AY extolled his wife

In the first half, PSG appeared to be a step faster than their more seasoned opponents, but the visitors’ experience took the sting out of Mauricio Pochettino’s side as halftime approached.

After the interval, the hosts were quick out of the blocks, creating their best chance within five minutes of the restart. Mbappé had a shot on goal thanks to incisive interaction on the edge of the area, but Courtois came down smartly to his right to deny the Frenchman.

Carvajal’s resistance was ultimately broken on the hour mark, when he chopped down Mbappe inside the box, negating the need for a VAR review. Messi, Real’s nemesis, would take the kick from 12 yards, which was fitting. Messi fluffed his lines in his 46th encounter with the Spanish giants, and his first since leaving FC Barcelona, as Courtois comfortably denied him from the spot.

Mbappe came agonizingly close to breaking the deadlock once more, curling a close-range effort from the left agonisingly wide. The 23-year-old had threatened to do it all night, but it took a world-class performance in stoppage time to win the game.

Neymar’s clever flick created space on the left for the Frenchman, who then slalomed between Éder Milito and Lucas Vázquez to finish beautifully. Real lost in the last 16 for only the second time in their past 12, putting them up against an uphill fight in the second leg.

7 – Kylian Mbappé has been involved in at least 1 goal in each of his last 7 games in the Champions League (5 goals, 4 assists), equalling the record for a 🇫🇷 French player in the competition since Opta collects this data (2003/04) set by … himself in May-December 2017. Crack. pic.twitter.com/hUBQ6zZsgZ

STATS BETWEEN BOTH TEAMS

In Ligue 1, PSG travels to Nantes, while Real hosts Alaves in La Liga, with both games starting at 8 p.m. on Saturday.