In-depth match report as Marcus Rashford’s stoppage-time goal secured Man Utd a dramatic 1-0 victory against West Ham at Old Trafford. The game looked to be heading for a draw but Rashford late strike with almost the last kick of the game. This win sees Ralf Rangnick’s side go above Hammers into fourth. 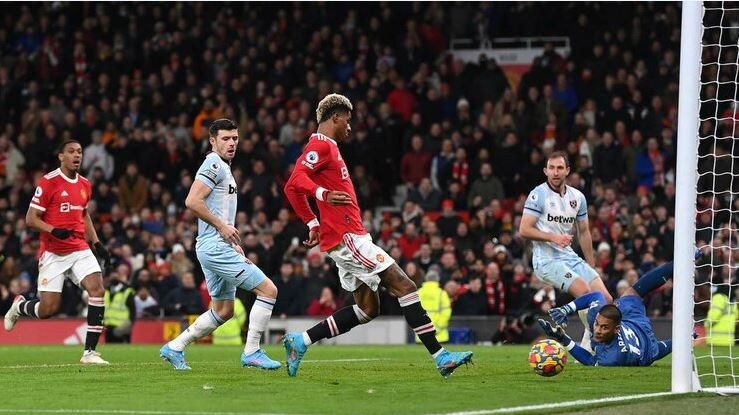 Rashford late strike earned Man United all three points, in a game everyone thought was going to end in a stalemate. All three of Ralf Rangnick’s substitutes combined as Anthony Martial played in Edinson Cavani, who crossed for Rashford to provide the finishing touch which broke Hammers resistance at Old Trafford.

Despite the tremendous stakes of this match, with both teams battling for a spot in the top four at the end of the day, the game got off to a fast and furious start. The hosts quickly gained control, but they struggled to find clear-cut opportunities. Aaron Cresswell saved Mason Greenwood’s threatening shot, and Cristiano Ronaldo came inches close from heading home Bruno Fernandes’ cross.

The ‘Hammers’ finest chances came on the counter-attack, with Michail Antonio and Jarrod Bowen eluding midfield challenges before succumbing to stiff challenges from the returning Harry Maguire. Before halftime, no team had managed to get a shot on target.

Moments after the restart, Alphonse Areola was put to the test, as a fortunate deflection gifted Fred a huge chance, but the French shot-stopper was able to turn his effort around the post.

The ‘Red Devils’ have yet to score from a corner this season, and Raphael Varane had a chance to change that on the hour mark, but his near-post header flew barely wide.

Ralf Rangnick substitution paid off as all three was involved in the goal. Anthony Martial gave a pass to Edinson Cavani who then squared across the six-yard box to find Rashford for a tap-in.

The Stretford End erupted in applause as the 24-year-old scored his second goal in as many outings, delivering a critical win for his side in the race for the top four. David Moyes’ side failed to pose a serious danger to David de Gea throughout the afternoon, extending their terrible record at Old Trafford, where they have failed to win in 14 league visits.

United forward spoke to the media after the game and surely the England international adored his late strike that gave his team all three points.

The English man disclosed this:

“They are the best games to be involved in and when you’re on the winning side of it, it’s a great feeling”. “Nothing really beats it in football.

“Very happy today and a very big game against an opponent who is very tight with us at the moment, so it was very important that we got the win.

“You might not see it now but, come to the end of the season, three points can be the difference between being in or out of the top four.

4 – Marcus Rashford has scored a 90th-minute winning goal for the fourth time in the Premier League, at least twice as many as any other Man Utd player. In fact, no player has ever scored more such winners in the competition's history. Mentality. pic.twitter.com/OVbt1CJF9t

“I’m pleased we managed to get them today and we have to use that as motivation.”

Rashford has now scored twice in two games having failed to find the net in his previous 11 appearances in all competitions.

“I think, for any forward when you go through a patch of not scoring for a few games, it’s a great feeling when the goals do start coming back,” he added.

“We just have to keep moving forward now and keep going in the right direction.”

Manchester United welcomes Middlesbrough at Old Trafford in the FA Cup fourth round on Friday, February 4 at 8 pm while West Ham visits non-League Kidderminster Harriers on Saturday, February 5 at 12.30 pm.