Real Madrid won the 35th La Liga title in the club’s history, as a Rodrygo double in a one-sided 4-0 victory over Espanyol at the Santiago Bernabéu fired ‘Los Blancos’ to the Spanish title with four games left to play. 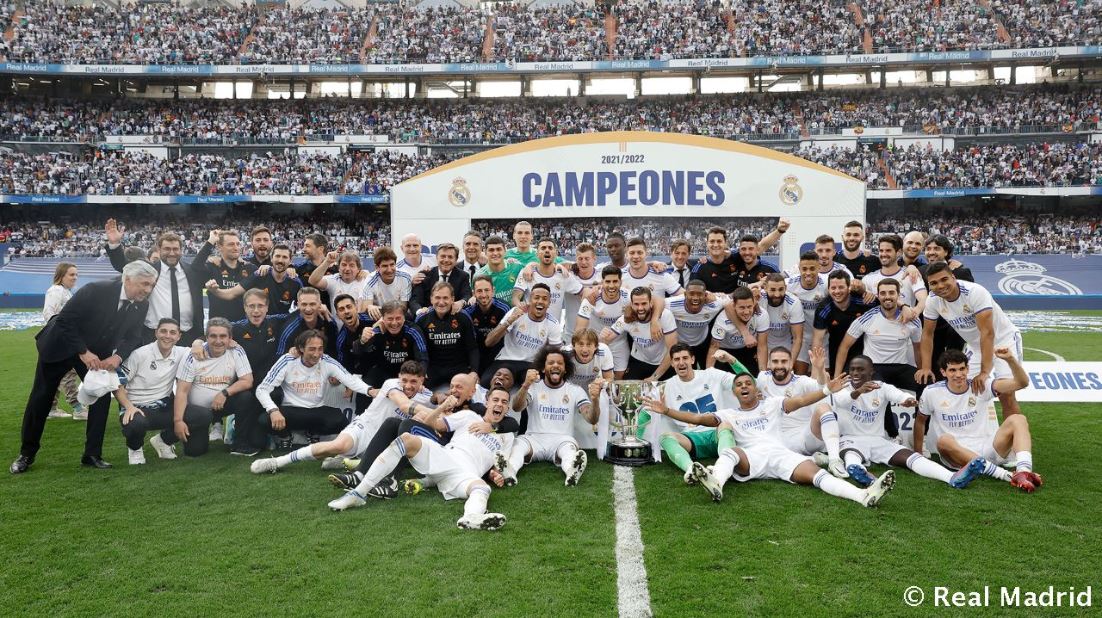 Real Madrid took to the field against Espanyol knowing that a single point would be enough to secure their 35th LaLiga title, but the Whites came out firing, taking all three points. Ancelotti’s men dominated the Catalans, winning 3-0 thanks to a first-half brace from Rodrygo and goals from Asensio and Benzema in the second half.’Los Blancos’ won their 35th league title with four games remaining in the season.

Mariano had the first clear chance of the game in the 13th minute when Ceballos played a cross into the area and Casemiro nodded across goal for the forward, whose header rebounded off the post. Mariano produced a powerful header from Modri’s cross ten minutes later, but his effort went narrowly wide of the far post. The hosts kept the pressure on the visitors’ defence and broke through at the half-hour mark. Rodrygo exchanged a neat one-two with Marcelo on the edge of the box before driving past two defenders and slotting the ball into the bottom right corner with his right foot.

The Bernabéu was ecstatic as their team went up 2-0 before the break. Rodrygo scored again in the 43rd minute, this time with a spectacular finish after Mariano had won the ball near the area. The Brazilian entered the ring, defeated Cabrera, and fooled Diego López with his finish. The game had heated up, and they could have added a third in stoppage time, but Marcelo’s right-footed effort from distance sailed inches wide of the visitors’ goal. The third goal came in the 56th minute. Camavinga won possession of the ball in his own half to set up a counter-attack, carrying it before releasing Asensio, who beat Diego Lopez with his right foot.

Carlo Ancelotti is the first coach to win the league title in all five major leagues. The Italian introduced Benzema, Kroos, and Isco in the 60th minute. The fourth goal appeared to have arrived ten minutes later. A fantastic team move resulted in Lucas Vázquez going one-on-one, but his strike was inches wide. Shortly after, Benzema set up Isco for a goal, but the goal was disallowed by the referee because Rodrygo was deemed to be in an offside position. Benzema, on the other hand, was to score in the 81st minute, adding to his spectacular scoring form, with Vini Jr providing the assist. Real Madrid has been crowned LaLiga champions.