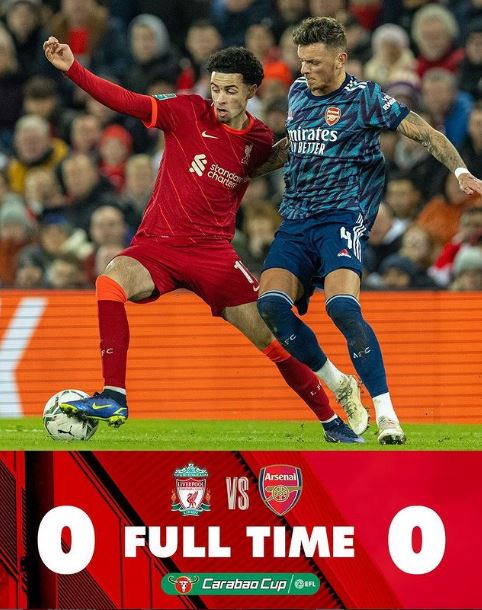 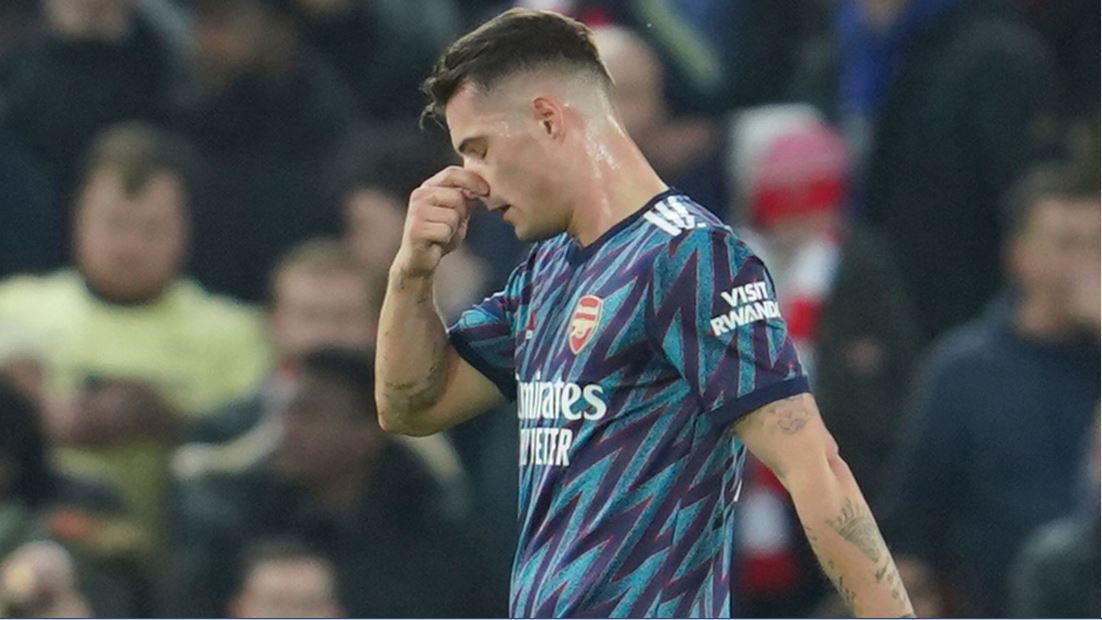 Despite Granit Xhaka’s early red card in the first leg of their Carabao Cup semi-final, Arsenal held Liverpool to a goalless draw.

Resilient 10-man Arsenal held Liverpool after a red card was shown to Granit Xhaka early in the first half. Andy Robertson’s long pass found Jota on the run, and as he tried to race into the box, Xhaka caught him with a high boot to the chest. It was irresponsible, and Oliver had no choice but to dismiss him.

From the time Xhaka was dismissed, most inside Anfield expected a barrage of abuse. Liverpool’s attempts lacked incision without Mo Salah and Sadio Mane, which was concerning.

The chances created were few and far between, and Aaron Ramsdale in the Arsenal goal was rarely put to the test. In their absence, Takumi Minamino and Roberto Firmino struggled to make an effect.

On 72 minutes, Arsenal had one of the few clear chances after the red card, as Alexandre Lacazette and Kieran Tierney connected before the latter found Bukayo Saka in the area, but he was stopped by Alisson’s quick thinking, as he sprinted off his line to prevent him from converting.

On 90 minutes, Liverpool had a chance to take the game, but Minamino managed to blaze past the bar and into the Kop with the goal at his mercy.

Liverpool manager Jurgen Klopp said: “For obvious reasons, we had to change the line-up tonight. I really liked the way we started in the game. I saw absolutely everything I wanted to see in the beginning – we were front-footed in the right moments, and started the game like we wanted to start.

“Then after the red card we were playing against a low block, and against the most finely-tuned teams, it’s difficult. On top of that, we made a few wrong decisions and looked rushed. It’s a typical situation, you go to try and win something and in a second it can turn into a situation where you can lose.

“But we couldn’t create enough for the situation we were in against 10 men. That’s clear enough. But again this is a cup competition. It’s a two-leg semi-final, it’s half-time. At 0-0 Arsenal might be in a slightly better position, but we don’t think this tie is over for us.”

Arsenal manager Mikel Arteta said: “We certainly rebelled against the situation, which I expect from the players. I think they showed great fight, determination, attitude, brotherhood. You could see the emotion they were playing with. They never gave up.

“It’s extremely difficult to do it in this ground against this opponent. Credit to the boys. It’s just the first leg but to do what we’ve done today, I think they deserve a lot of credit for that.

“I don’t know if [the sending off] inspired them but we certainly took the fight. I said to them before the game that you have to have a certain attitude to play on this ground.

In difficult moments, you have to act, but you can’t be overreacting because then it becomes really complicated. I think the boys did that extremely well in certain moments. We played the game that we had to play, which is not our game, but we managed to do it.

Both teams are back in Premier League action on Sunday, ahead of the second leg next week. Liverpool hosts Brentford at 2 p.m., while Arsenal travels to Tottenham for a massive north London derby at 4.30 p.m. in the Premier League.

ARSENAL IN ALL WHITE SHIRT