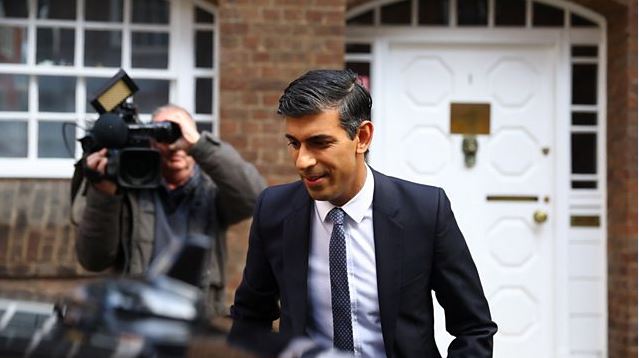 After defeating his lone surviving challenger in the accelerated race to become the leader of the Conservative party on Monday, former finance minister Rishi Sunak will become the next prime minister of the United Kingdom.

Penny Mordaunt, the other prospective contender, resigned after falling short of the number of legislative nominations necessary to advance to the next round of the contest. Just before the number of nominations was to be revealed, Mordaunt vowed to stand for Sunak wholeheartedly.

Sunak will rule the UK for the first time as a person of color and a Hindu. He is the youngest individual to hold the position in more than 200 years, at the age of 42.

Speaking after the announcement, Sunak said he was “humbled and honored” to have been elected leader. “It is the greatest privilege of my life to be able to serve the party I love and give back to the country I owe so much to,” he said in a brief televised statement.

Liz Truss, who will hold the record for the shortest tenure as prime minister of the UK, will be replaced by Sunak. Sunak will be sworn in as prime minister on Tuesday after being formally chosen by King Charles III. He will be the first leader chosen by the new monarch since Queen Elizabeth II’s passing in September.

According to enomaomoruyi news, the King left the exclusive royal estate of Sandringham on Monday afternoon for London, as had been his original plan. On Tuesday morning, before meeting with Sunak, he will have a meeting with Truss.

According to Sanjay Chandarana, the leader of a Hindu temple that Sunak’s grandparents helped co-found in 1971, Sunak’s ascension represents a watershed in British South Asian history.

“It’s a Barack Obama moment for us. A South Asian, Indian origin prime minister in the UK. Everyone here is so thrilled to hear that news,” Chandarana, the president of the Vedic Society Hindu Temple in Southampton, told CNN.

Sunak’s parents moved from East Africa to the UK in the 1960s, and his grandparents were born in India. Sunak has talked openly about his British Indian ancestry and revealed in a 2015 interview with the Business Standard that he checked the British Indian box on the census.

“I am thoroughly British, this is my home and my country, but my religious and cultural heritage is Indian, my wife is Indian. I am open about being a Hindu,” Sunak told Business Standard.

Back home in India, Prime Minister Narendra Modi on Monday offered his “warmest congratulations” to Sunak, calling the incoming Prime Minister a bridge between both countries.

Modi in a Tweet said: “Special Diwali wishes to the ‘living bridge’ of UK Indians, as we transform our historic ties into a modern partnership.”

Duchess of Sussex, Meghan Markle says she is 43% Nigerian