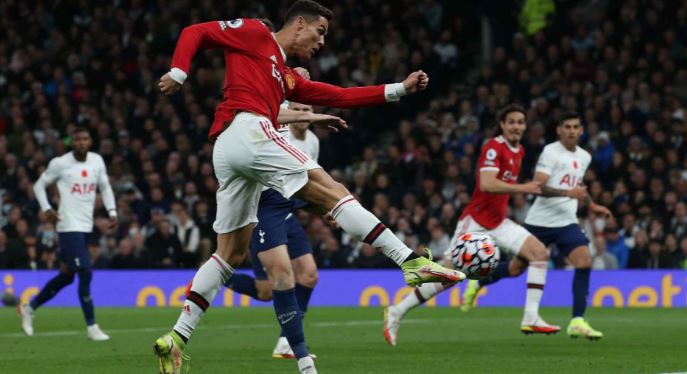 Manchester United’s performance against Tottenham Hotspur was praised by Ronaldo as “unbelievable.”

Ole Gunnar Solskjaer switched formations, opting for a three-man centre defence and a two-man strike combination, of which Ronaldo was, of course, a member. Man Utd’s game plan paid off, as this was perhaps their best-controlled performance of the season.

“We knew going into the game that we’d have a rough week [following] an unexpected result,” Ronaldo told Sky Sports.

MUST READ:  CAF Kick Out Kenya, Zimbabwe From AFCON 2023

“The squad felt a little tense, a little depressed, but we knew we could deliver a nice solution today.” We played well, and we got off to a strong start.

“Of course, my job is to contribute to the team with my experience, goals, and assists, which I achieved today and am very proud of.” But, in terms of the team, I thought it was a tremendous performance.”

With a well-placed and well-timed pass between two defenders, Ronaldo scored United’s first goal and set up Cavani for the game’s second.

It’s the first time Ronaldo has spoken publicly since the dismal outcome against Liverpool last Sunday, and he admits it’s been a trying time.

“It was difficult,” he said. “We weren’t expecting the Premier League’s most recent result.” But, you know, I’m hoping we can turn the page this time.

“I believe that everything happens for a purpose, and we should be grateful for this wonderful afternoon.” We won 3-0 in a hostile environment against a difficult opponent, and we are ecstatic.”

After a week of severe media criticism, the team’s ability to win with such a strong performance showed amazing resiliency.

Because of the size of Man Utd as a club, Ronaldo noted that the pressure is ‘natural.’

“There are always going to be criticisms,” the 36-year-old stated.

“It doesn’t concern me because I’ve played football for 18 years and know that one day people will say we’re amazing and the next day they’ll say we’re terrible.

“I understand it, and we must cope with that, but it’s always great when people compliment you and are pleased with you.

“Sometimes life is like that; we have to go through difficult times and change, and we did just that today.”