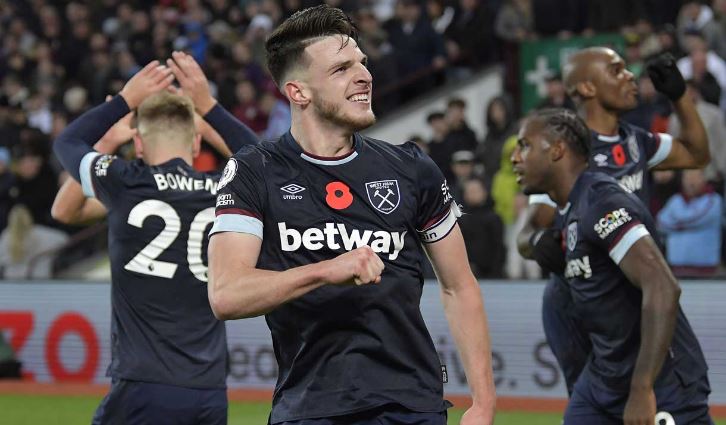 Ruthless West Ham put up a brilliant performance as they hammered 10-man Villa 4-1 at Villa Park.

West Ham has now won back-to-back visits to Villa Park for the first time since 1967.

With the hammering of 10-man Aston Villa on Sunday afternoon, ruthless West Ham preserved their unbeaten away record in 2021-22.

David Moyes’ team scored twice on either side of halftime to win 4-1 and draw level on points with Manchester City in third place.

West Ham has never had 20 points in the opening ten games of a season in Premier League history.

Following Ben Johnson’s early strike, the Hammers were pegged back by Ollie Watkins’ equalizer, only for Declan Rice to immediately reclaim the lead.

Early in the second half, Ezri Konsa’s red card hurt his team’s efforts, but they kept pressing until West Ham pulled the game away from them in the dying stages thanks to goals from Pablo Fornals and Jarrod Bowen.

After making eight changes for the Carabao Cup win over Manchester City in midweek, West Ham manager David Moyes resorted to the eleven that had won their previous two Premier League matches, and they quickly set about trying to exploit any early Villa fears.

Rice swept a ball out to Johnson far too easily in the seventh minute, as the hosts had lost their previous three games and were sluggish in their defending in the early exchanges.

Matt Targett, a left-back for West Ham, took advantage of the situation by stepping inside and blasting past home goalkeeper Emiliano Martinez into the bottom left-hand corner.

In those early exchanges, West Ham kept their foot on the gas, and Bowen was only denied a second goal by a crucial headed block from close range by Matty Cash.

Had Cash’s touch not taken the ball over the bar in the 16th minute, the No 20’s strike would have been heading for the net.

With Moyes’ players working hard off the ball and efficiently limiting Villa’s space, they hadn’t really been threatened until Watkins levelled the game with 34 minutes remaining.

Emiliano Buendia got the wrong side of Fornals and advanced to the by-line, where he cut back for Watkins to finish low and hard from 12 yards thanks to John McGinn’s excellent reverse ball.

Again, the hosts allowed West Ham to play their football in front of them, enabling Sad Benrahma the space he needed to lay off to Rice 25 yards away, who was able to take a touch before hammering home via the foot of the left-hand post.

If Villa were struggling at the interval, their task was made even more difficult two minutes into the second half when Konsa was sent off by referee Chris Kavanagh.

The home defender appeared to have gotten away with a yellow card for his foul on Bowen just outside the box at first, but VAR Stuart Attwell summoned Kavanagh to his pitchside monitor and determined that he had, in fact, denied a clear goalscoring opportunity.

Despite this, Villa came within a hair of tying the game on 57 minutes when Watkins went up to head goalwards from eight yards, but Lukasz Fabianski reacted brilliantly to tip his shot onto the crossbar.

MUST READ:  Arteta-fight for a top-four spot will be a rollercoaster right until the end

To their credit, the hosts kept West Ham honest and enjoyed periods of dominance before Moyes’ side sealed the victory in the final 10 minutes.

After Martinez had denied Bowen with a solid hand down low to his right, Fornals scored their third goal with the perfect time to thump into the net.

The setback for Villa, on the other hand, may send shivers down their spines, as it marks their fourth straight defeat for the first time since March 2020.